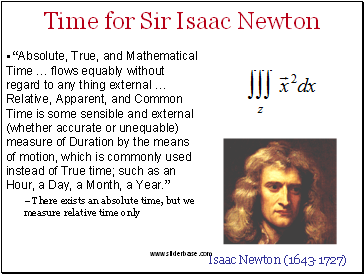 “Absolute, True, and Mathematical Time … flows equably without regard to any thing external … Relative, Apparent, and Common Time is some sensible and external (whether accurate or unequable) measure of Duration by the means of motion, which is commonly used instead of True time; such as an Hour, a Day, a Month, a Year.”

There exists an absolute time, but we measure relative time only 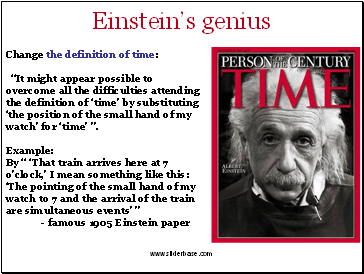 Change the definition of time:

“It might appear possible to overcome all the difficulties attending the definition of ‘time’ by substituting ‘the position of the small hand of my watch’ for ‘time’ ”.

By “ ‘That train arrives here at 7 o’clock,’ I mean something like this: ‘The pointing of the small hand of my watch to 7 and the arrival of the train are simultaneous events’ ” 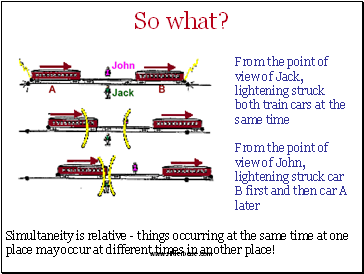 From the point of view of Jack, lightening struck both train cars at the same time

From the point of view of John, lightening struck car B first and then car A later

Simultaneity is relative - things occurring at the same time at one place may occur at different times in another place! 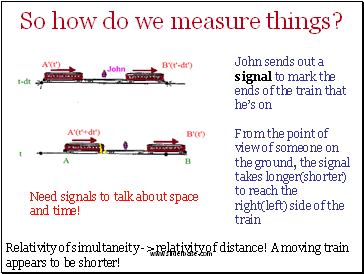 So how do we measure things?

From the point of view of someone on the ground, the signal takes longer(shorter) to reach the right(left) side of the train

Relativity of simultaneity -> relativity of distance! A moving train appears to be shorter!

Need signals to talk about space 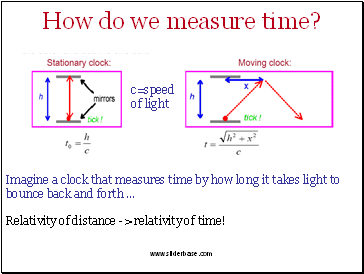 How do we measure time? 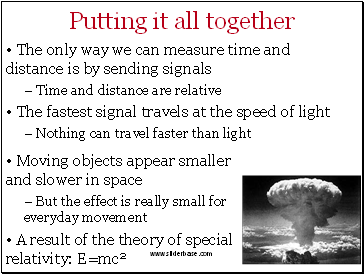 Putting it all together

Time and distance are relative

The fastest signal travels at the speed of light

Nothing can travel faster than light

But the effect is really small for everyday movement

A result of the theory of special relativity: E=mc2 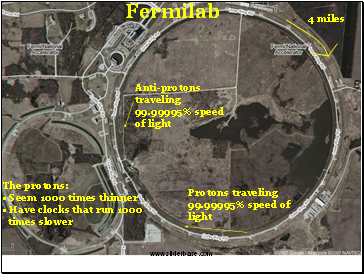