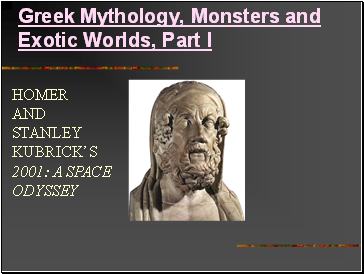 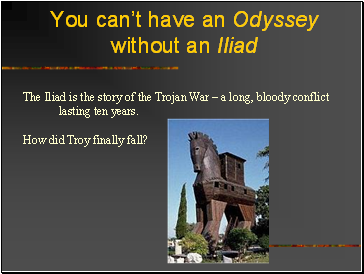 You can’t have an Odyssey without an Iliad

The Iliad is the story of the Trojan War – a long, bloody conflict

How did Troy finally fall? 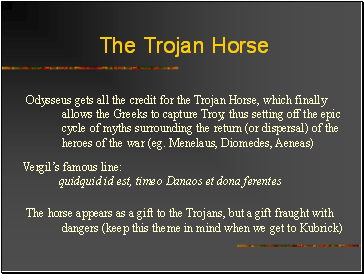 Odysseus gets all the credit for the Trojan Horse, which finally

allows the Greeks to capture Troy, thus setting off the epic

cycle of myths surrounding the return (or dispersal) of the

The horse appears as a gift to the Trojans, but a gift fraught with

dangers (keep this theme in mind when we get to Kubrick) 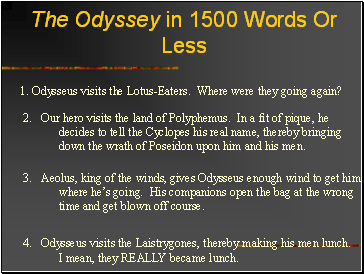 1. Odysseus visits the Lotus-Eaters. Where were they going again?

Our hero visits the land of Polyphemus. In a fit of pique, he

decides to tell the Cyclopes his real name, thereby bringing

down the wrath of Poseidon upon him and his men.

Aeolus, king of the winds, gives Odysseus enough wind to get him

where he’s going. His companions open the bag at the wrong

time and get blown off course.

I mean, they REALLY became lunch. 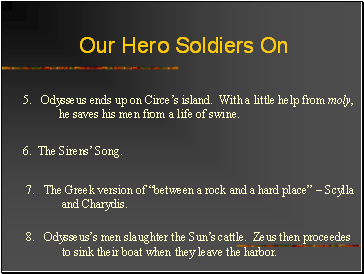 Our Hero Soldiers On

Odysseus ends up on Circe’s island. With a little help from moly,

he saves his men from a life of swine.

to sink their boat when they leave the harbor. 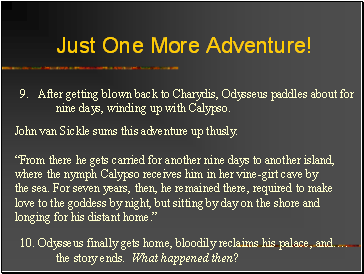 After getting blown back to Charydis, Odysseus paddles about for

nine days, winding up with Calypso.

“From there he gets carried for another nine days to another island,

the sea. For seven years, then, he remained there, required to make

love to the goddess by night, but sitting by day on the shore and

longing for his distant home.”

Odysseus finally gets home, bloodily reclaims his palace, and….

the story ends. What happened then?