Banneker Blast From The Past
Page
2

In 1753, the young man borrowed a pocket watch from a well-to-do neighbor; he took it apart and made a drawing of each component, then reassembled the

watch and returned it, fully functioning, to its owner.

From his drawings Banneker then proceeded to carve, out of wood, enlarged replicas of each part. Calculating the proper number of teeth for each gear and the necessary relationships between the gears, he constructed a working wooden clock that kept accurate time and struck the hours for over 50 years. 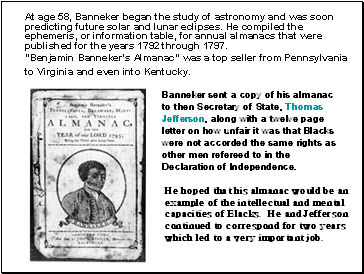 At age 58, Banneker began the study of astronomy and was soon predicting future solar and lunar eclipses. He compiled the ephemeris, or information table, for annual almanacs that were published for the years 1792 through 1797.

"Benjamin Banneker's Almanac" was a top seller from Pennsylvania to Virginia and even into Kentucky.

He hoped that his almanac would be an

example of the intellectual and mental

capacities of Blacks. He and Jefferson

continued to correspond for two years

which led to a very important job.

Banneker sent a copy of his almanac to then Secretary of State, Thomas Jefferson, along with a twelve page letter on how unfair it was that Blacks were not accorded the same rights as other men refereed to in the Declaration of Independence. 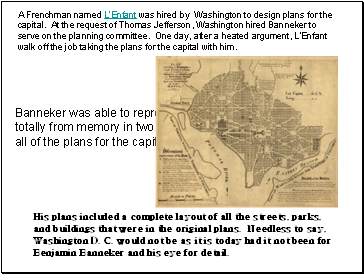 Banneker was able to reproduce

totally from memory in two days

all of the plans for the capital.

His plans included a complete layout of all the streets, parks,

and buildings that were in the original plans. Needless to say,

Washington D. C. would not be as it is today had it not been for

Benjamin Banneker and his eye for detail. 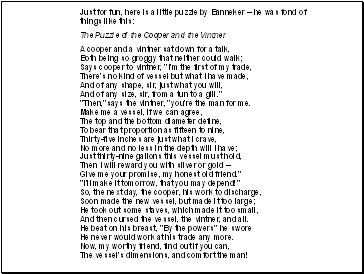 Just for fun, here is a little puzzle by Banneker -- he was fond of things like this:

The Puzzle of the Cooper and the Vintner

A cooper and a vintner sat down for a talk, Both being so groggy that neither could walk; Says cooper to vintner, "I'm the first of my trade, There's no kind of vessel but what I have made, And of any shape, sir, just what you will, And of any size, sir, from a tun to a gill." "Then,"says the vintner, "you're the man for me. Make me a vessel, if we can agree, The top and the bottom diameter define, To bear that proportion as fifteen to nine, Thirty-five inches are just what I crave, No more and no less in the depth will I have; Just thirty-nine gallons this vessel must hold, Then I will reward you with silver or gold -- Give me your promise, my honest old friend." "I'll make it tomorrow, that you may depend!" So, the next day, the cooper, his work to discharge, Soon made the new vessel, but made it too large; He took out some staves, which made it too small, And then cursed the vessel, the vintner, and all. He beat on his breast, "By the powers" he swore He never would work at his trade any more. Now, my worthy friend, find out if you can, The vessel's dimensions, and comfort the man!