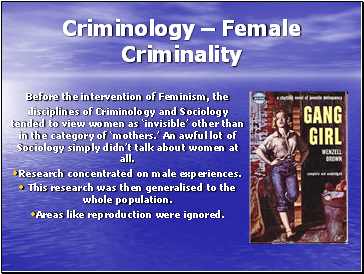 Before the intervention of Feminism, the

disciplines of Criminology and Sociology tended to view women as ‘invisible’ other than in the category of ‘mothers.’ An awful lot of Sociology simply didn’t talk about women at all.

This research was then generalised to the whole population. 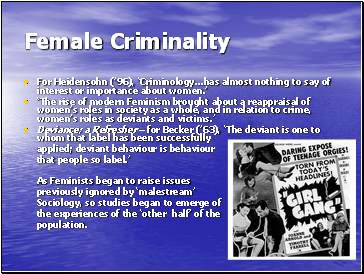 For Heidensohn (’96), ‘Criminology…has almost nothing to say of interest or importance about women.’

‘The rise of modern Feminism brought about a reappraisal of women’s roles in society as a whole, and in relation to crime, women’s roles as deviants and victims.’

Deviance; a Refresher – for Becker (’63), ‘The deviant is one to whom that label has been successfully

that people so label.’

As Feminists began to raise issues

Sociology, so studies began to emerge of

the experiences of the ‘other half’ of the 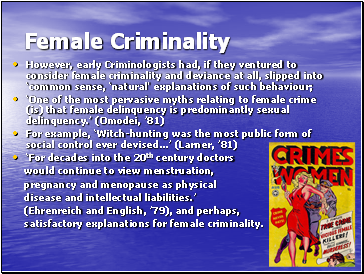 However, early Criminologists had, if they ventured to consider female criminality and deviance at all, slipped into ‘common sense, ‘natural' explanations of such behaviour;

‘One of the most pervasive myths relating to female crime (is) that female delinquency is predominantly sexual delinquency.’ (Omodei, ’81)

For example, ‘Witch-hunting was the most public form of social control ever devised…’ (Larner, ’81)

‘For decades into the 20th century doctors

would continue to view menstruation,

pregnancy and menopause as physical 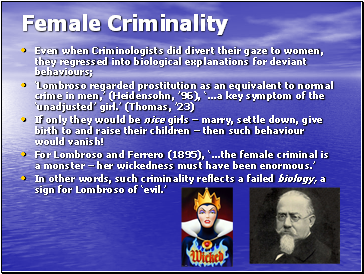 Even when Criminologists did divert their gaze to women, they regressed into biological explanations for deviant behaviours;

‘Lombroso regarded prostitution as an equivalent to normal crime in men,’ (Heidensohn, ’96), ‘…a key symptom of the ‘unadjusted’ girl.’ (Thomas, ’23)

If only they would be nice girls – marry, settle down, give birth to and raise their children – then such behaviour would vanish!

For Lombroso and Ferrero (1895), ‘…the female criminal is a monster – her wickedness must have been enormous.’

In other words, such criminality reflects a failed biology, a sign for Lombroso of ‘evil.’ 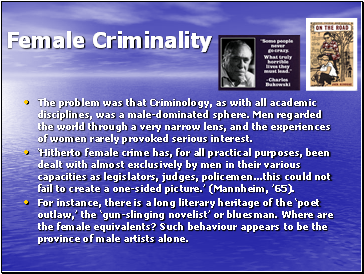