The problem was that Criminology, as with all academic disciplines, was a male-dominated sphere. Men regarded the world through a very narrow lens, and the experiences of women rarely provoked serious interest.

‘Hitherto female crime has, for all practical purposes, been dealt with almost exclusively by men in their various capacities as legislators, judges, policemen…this could not fail to create a one-sided picture.’ (Mannheim, ’65).

For instance, there is a long literary heritage of the ‘poet outlaw,’ the ‘gun-slinging novelist’ or bluesman. Where are the female equivalents? Such behaviour appears to be the province of male artists alone. 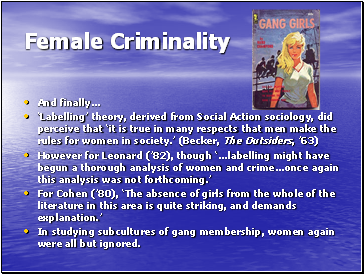 ‘Labelling’ theory, derived from Social Action sociology, did perceive that ‘it is true in many respects that men make the rules for women in society.’ (Becker, The Outsiders, ’63)

However for Leonard (’82), though ‘…labelling might have begun a thorough analysis of women and crime…once again this analysis was not forthcoming.’

For Cohen (’80), ‘The absence of girls from the whole of the literature in this area is quite striking, and demands explanation.’

In studying subcultures of gang membership, women again were all but ignored. 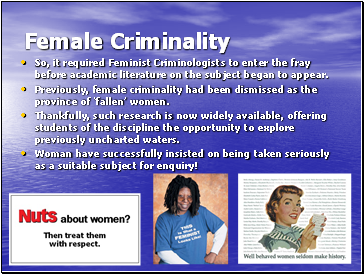 So, it required Feminist Criminologists to enter the fray before academic literature on the subject began to appear.

Previously, female criminality had been dismissed as the province of ‘fallen’ women.

Thankfully, such research is now widely available, offering students of the discipline the opportunity to explore previously uncharted waters.

Woman have successfully insisted on being taken seriously as a suitable subject for enquiry!