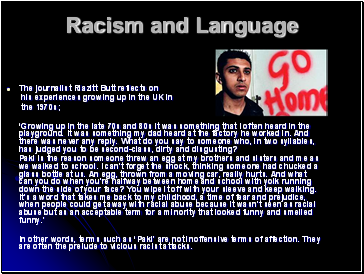 The journalist Riazitt Butt reflects on

his experiences growing up in the UK in

‘Growing up in the late 70s and 80s it was something that I often heard in the playground. It was something my dad heard at the factory he worked in. And there was never any reply. What do you say to someone who, in two syllables, has judged you to be second-class, dirty and disgusting?

Paki is the reason someone threw an egg at my brothers and sisters and me as we walked to school. I can't forget the shock, thinking someone had chucked a glass bottle at us. An egg, thrown from a moving car, really hurts. And what can you do when you're halfway between home and school with yolk running down the side of your face? You wipe it off with your sleeve and keep walking. It's a word that takes me back to my childhood, a time of fear and prejudice, when people could get away with racial abuse because it wasn't seen as racial abuse but as an acceptable term for a minority that looked funny and smelled funny.’

In other words, terms such as ‘Paki’ are not inoffensive terms of affection. They are often the prelude to vicious racist attacks. 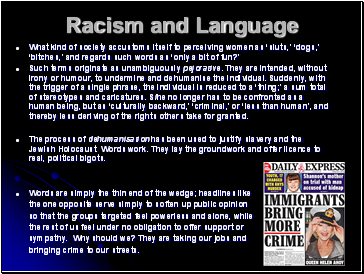 What kind of society accustoms itself to perceiving women as ‘sluts,’ ‘dogs,’ ‘bitches,’ and regards such words as ‘only a bit of fun?’

Such terms originate as unambiguously pejorative. They are intended, without irony or humour, to undermine and dehumanise the individual. Suddenly, with the trigger of a single phrase, the individual is reduced to a ‘thing;’ a sum total of stereotypes and caricatures. S/he no longer has to be confronted as a human being, but as ‘culturally backward,’ ‘criminal,’ or ‘less than human’, and thereby less deriving of the rights others take for granted.

The process of dehumanisation has been used to justify slavery and the Jewish Holocaust. Words work. They lay the groundwork and offer licence to real, political bigots.

Words are simply the thin end of the wedge; headlines like

the one opposite serve simply to soften up public opinion

so that the groups targeted feel powerless and alone, while

sympathy. Why should we? They are taking our jobs and

bringing crime to our streets. 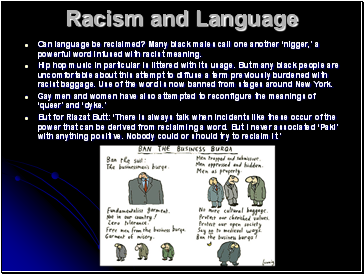 Can language be reclaimed? Many black males call one another ‘nigger,’ a powerful word infused with racist meaning.

Hip hop music in particular is littered with its usage. But many black people are uncomfortable about this attempt to diffuse a term previously burdened with racist baggage. Use of the word is now banned from stages around New York.