Gay men and women have also attempted to reconfigure the meanings of ‘queer’ and ‘dyke.’

But for Riazat Butt: ‘There is always talk when incidents like these occur of the power that can be derived from reclaiming a word. But I never associated ‘Paki’ with anything positive. Nobody could or should try to reclaim it.’ 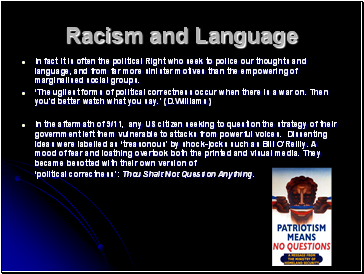 In fact it is often the political Right who seek to police our thoughts and language, and from far more sinister motives than the empowering of marginalised social groups.

‘The ugliest forms of political correctness occur when there is a war on. Then you’d better watch what you say.’ (D.Williams)

In the aftermath of 9/11, any US citizen seeking to question the strategy of their government left them vulnerable to attacks from powerful voices. Dissenting ideas were labelled as ‘treasonous’ by shock-jocks such as Bill O’Reilly. A mood of fear and loathing overtook both the printed and visual media. They became besotted with their own version of

‘political correctness’: Thou Shalt Not Question Anything. 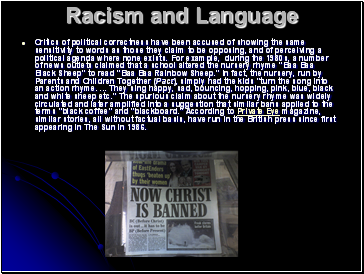 Critics of political correctness have been accused of showing the same sensitivity to words as those they claim to be opposing, and of perceiving a political agenda where none exists. For example, during the 1980s, a number of news outlets claimed that a school altered the nursery rhyme "Baa Baa Black Sheep" to read "Baa Baa Rainbow Sheep." In fact, the nursery, run by Parents and Children Together (Pact), simply had the kids "turn the song into an action rhyme. . They sing happy, sad, bouncing, hopping, pink, blue, black and white sheep etc." The spurious claim about the nursery rhyme was widely circulated and later amplified into a suggestion that similar bans applied to the terms "black coffee" and "blackboard." According to Private Eye magazine, similar stories, all without factual basis, have run in the British press since first appearing in The Sun in 1986. 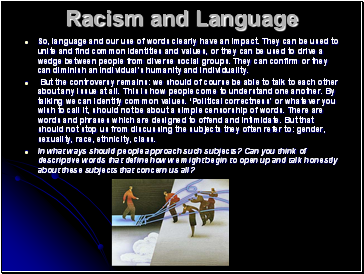 But the controversy remains: we should of course be able to talk to each other about any issue at all. This is how people come to understand one another. By talking we can identify common values. ‘Political correctness’ or whatever you wish to call it, should not be about a simple censorship of words. There are words and phrases which are designed to offend and intimidate. But that should not stop us from discussing the subjects they often refer to: gender, sexuality, race, ethnicity, class.