Uses of PAST CONTINUOUS 2.two actions happening at the same time in the past.

wHile she wAs preraring dinner, he was washing the dishes. 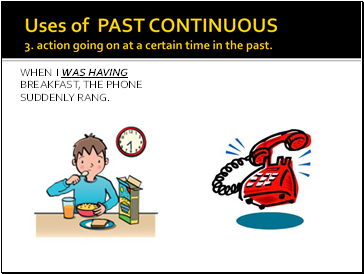 Uses of PAST CONTINUOUS 3. action going on at a certain time in the past.

wHen I was having breakfast, the phone suddenly rang. 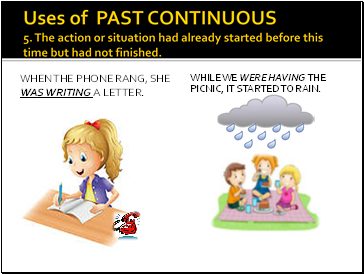 Uses of PAST CONTINUOUS 5. The action or situation had already started before this time but had not finished.

wHen the phone rang, she was writing a letter.

While we were having the picnic, it started to rain. 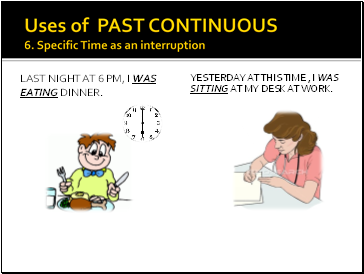 Uses of PAST CONTINUOUS 6. Specific Time as an interruption

Last night at 6 pm, I was eating dinner.

Yesterday at this time , I was sitting at my desk at work. 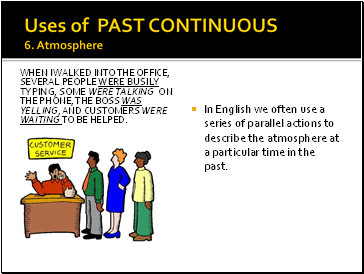 Uses of PAST CONTINUOUS 6. Atmosphere

When I walked into the office, several people were busily typing, some were talking on the phone, the boss was yelling, and customers were waiting to be helped.

In English we often use a series of parallel actions to describe the atmosphere at a particular time in the past. 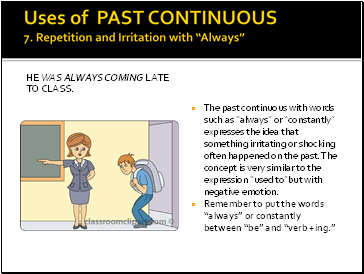 Uses of PAST CONTINUOUS 7. Repetition and Irritation with “Always”

he was always coming late to class.

The past continuous with words such as “always” or “constantly” expresses the idea that something irritating or shocking often happened on the past. The concept is very similar to the expression “used to”but with negative emotion.

Remember to put the words “always” or constantly between “be” and “verb +ing.” 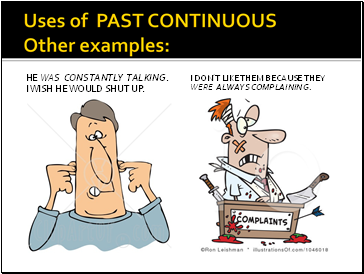 Uses of PAST CONTINUOUS Other examples:

He was constantly talking.

I wish he would shut up.

I don’t like them because they were always complaining. 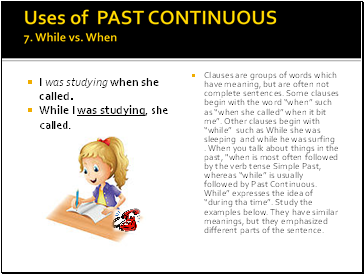 Uses of PAST CONTINUOUS 7. While vs. When

Clauses are groups of words which have meaning, but are often not complete sentences. Some clauses begin with the word “when” such as “when she called” when it bit me”. Other clauses begin with “while” such as While she was sleeping and while he was surfing . When you talk about things in the past, "when is most often followed by the verb tense Simple Past, whereas “while” is usually followed by Past Continuous. While” expresses the idea of “during tha time”. Study the examples below. They have similar meanings, but they emphasized different parts of the sentence.