Exam Questions on Of Mice and Men
Page
1

Presentations / English Literature / Exam Questions on Of Mice and Men 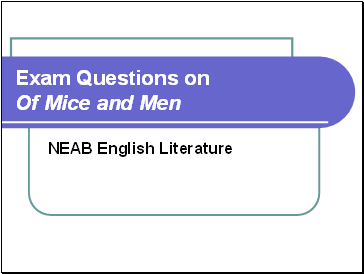 Exam Questions on Of Mice and Men 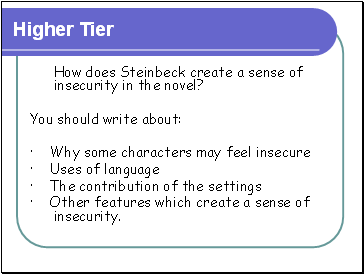 How does Steinbeck create a sense of insecurity in the novel?

· Why some characters may feel insecure

· The contribution of the settings

· Other features which create a sense of insecurity. 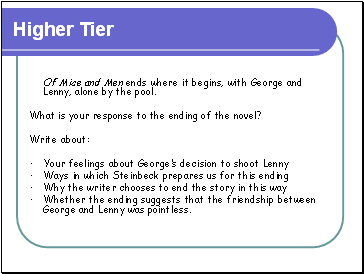 Of Mice and Men ends where it begins, with George and Lenny, alone by the pool.

What is your response to the ending of the novel?

· Your feelings about George’s decision to shoot Lenny

· Ways in which Steinbeck prepares us for this ending

· Why the writer chooses to end the story in this way

· Whether the ending suggests that the friendship between George and Lenny was pointless. 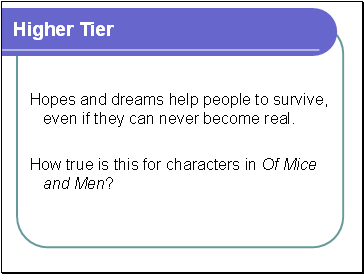 Hopes and dreams help people to survive, even if they can never become real.

How true is this for characters in Of Mice and Men? 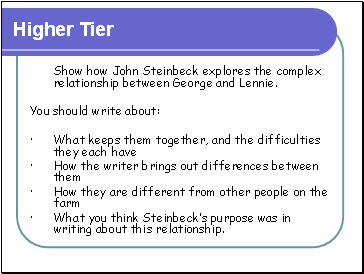 Show how John Steinbeck explores the complex relationship between George and Lennie.

· What keeps them together, and the difficulties they each have

· How the writer brings out differences between them

· How they are different from other people on the farm

· What you think Steinbeck’s purpose was in writing about this relationship. 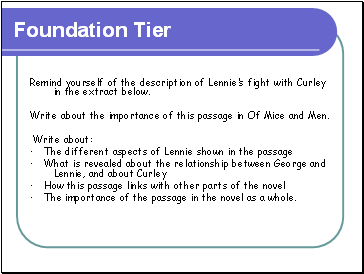 Remind yourself of the description of Lennie’s fight with Curley in the extract below.

Write about the importance of this passage in Of Mice and Men.

· The different aspects of Lennie shown in the passage

· What is revealed about the relationship between George and Lennie, and about Curley

· How this passage links with other parts of the novel

· The importance of the passage in the novel as a whole. 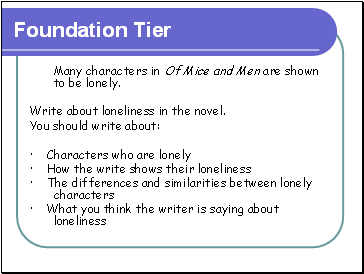 Many characters in Of Mice and Men are shown to be lonely.

Write about loneliness in the novel.

· Characters who are lonely

· How the write shows their loneliness

· The differences and similarities between lonely characters

· What you think the writer is saying about loneliness 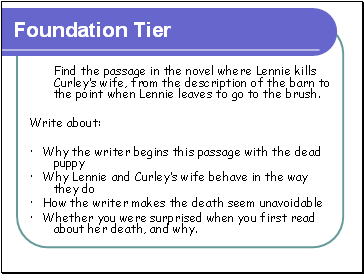