Loneliness and Isolation in “Of mice and Men”
Page
2

Because of his colour, Crooks must live by himself in a small room in the barn. Crooks becomes so accustomed to this constant isolation, that he is suspicious of any man who suddenly tries to make friends with him.

When Lennie accidentally stumbles onto Crooks' room one night in the barn and tries to sit down and talk, Crooks becomes so suspicious that he actually tries to drive Lennie away before giving up and allowing Lennie to come in. 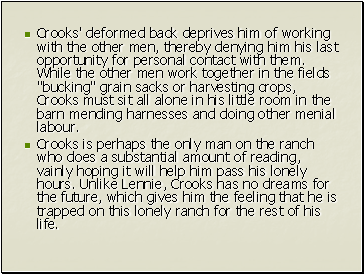 Crooks' deformed back deprives him of working with the other men, thereby denying him his last opportunity for personal contact with them. While the other men work together in the fields "bucking" grain sacks or harvesting crops, Crooks must sit all alone in his little room in the barn mending harnesses and doing other menial labour.

Crooks is perhaps the only man on the ranch who does a substantial amount of reading, vainly hoping it will help him pass his lonely hours. Unlike Lennie, Crooks has no dreams for the future, which gives him the feeling that he is trapped on this lonely ranch for the rest of his life. 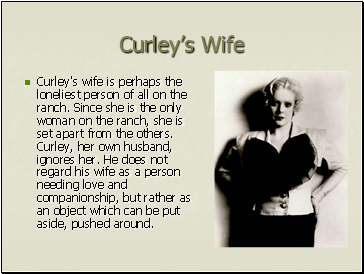 Curley's wife is perhaps the loneliest person of all on the ranch. Since she is the only woman on the ranch, she is set apart from the others. Curley, her own husband, ignores her. He does not regard his wife as a person needing love and companionship, but rather as an object which can be put aside, pushed around. 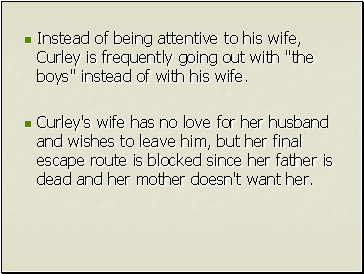 Instead of being attentive to his wife, Curley is frequently going out with "the boys" instead of with his wife.

Curley's wife has no love for her husband and wishes to leave him, but her final escape route is blocked since her father is dead and her mother doesn't want her. 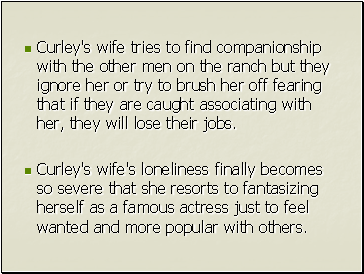 Curley's wife tries to find companionship with the other men on the ranch but they ignore her or try to brush her off fearing that if they are caught associating with her, they will lose their jobs.

Curley's wife's loneliness finally becomes so severe that she resorts to fantasizing herself as a famous actress just to feel wanted and more popular with others. 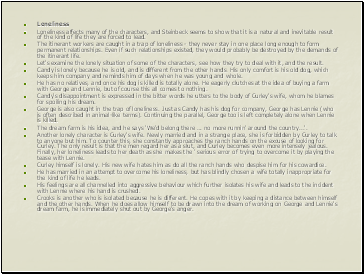 Loneliness affects many of the characters, and Steinbeck seems to show that it is a natural and inevitable result of the kind of life they are forced to lead.

The itinerant workers are caught in a trap of loneliness - they never stay in one place long enough to form permanent relationships. Even if such relationships existed, they would probably be destroyed by the demands of the itinerant life.