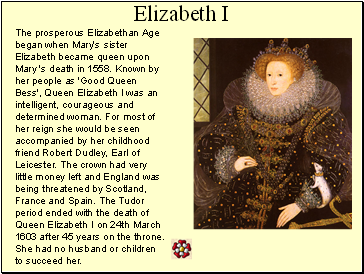 The prosperous Elizabethan Age began when Mary’s sister Elizabeth became queen upon Mary 's death in 1558. Known by her people as 'Good Queen Bess', Queen Elizabeth I was an intelligent, courageous and determined woman. For most of her reign she would be seen accompanied by her childhood friend Robert Dudley, Earl of Leicester. The crown had very little money left and England was being threatened by Scotland, France and Spain. The Tudor period ended with the death of Queen Elizabeth I on 24th March 1603 after 45 years on the throne. She had no husband or children to succeed her.