Nuclear fusion is very powerful as mass is converted into energy.

For a technical explanation of nuclear fusion, consider visiting 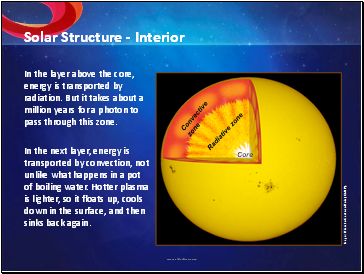 In the layer above the core, energy is transported by radiation. But it takes about a million years for a photon to pass through this zone.

In the next layer, energy is transported by convection, not unlike what happens in a pot of boiling water. Hotter plasma is lighter, so it floats up, cools down in the surface, and then sinks back again. 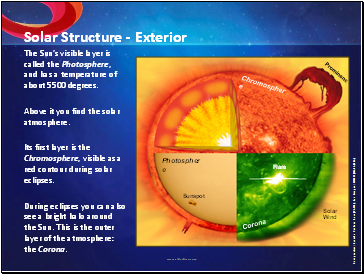 The Sun’s visible layer is called the Photosphere, and has a temperature of about 5500 degrees.

Above it you find the solar atmosphere.

Its first layer is the Chromosphere, visible as a red contour during solar eclipses.

During eclipses you can also see a bright halo around the Sun. This is the outer layer of the atmosphere: the Corona. 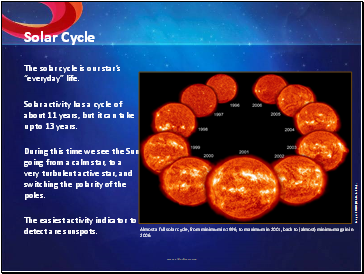 The solar cycle is our star’s “everyday” life.

Solar activity has a cycle of about 11 years, but it can take up to 13 years.

During this time we see the Sun going from a calm star, to a very turbulent active star, and switching the polarity of the poles.

The easiest activity indicator to detect are sunspots. 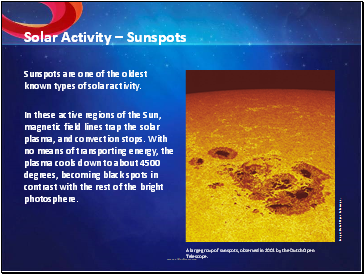 Sunspots are one of the oldest known types of solar activity.

In these active regions of the Sun, magnetic field lines trap the solar plasma, and convection stops. With no means of transporting energy, the plasma cools down to about 4500 degrees, becoming black spots in contrast with the rest of the bright photosphere.

A large group of sunspots, observed in 2003 by the Dutch Open Telescope. 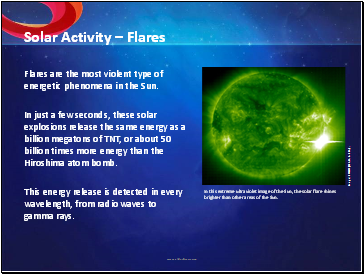 Flares are the most violent type of energetic phenomena in the Sun.

In just a few seconds, these solar explosions release the same energy as a billion megatons of TNT, or about 50 billion times more energy than the Hiroshima atom bomb.