This energy release is detected in every wavelength, from radio waves to gamma rays.

In this extreme ultraviolet image of the Sun, the solar flare shines brighter than other areas of the Sun. 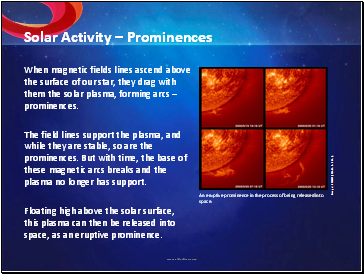 When magnetic fields lines ascend above the surface of our star, they drag with them the solar plasma, forming arcs – prominences.

The field lines support the plasma, and while they are stable, so are the prominences. But with time, the base of these magnetic arcs breaks and the plasma no longer has support.

Floating high above the solar surface, this plasma can then be released into space, as an eruptive prominence.

An eruptive prominence in the process of being released into space. 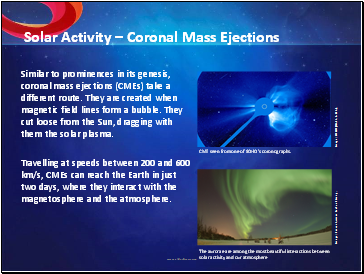 Similar to prominences in its genesis, coronal mass ejections (CMEs) take a different route. They are created when magnetic field lines form a bubble. They cut loose from the Sun, dragging with them the solar plasma.

Travelling at speeds between 200 and 600 km/s, CMEs can reach the Earth in just two days, where they interact with the magnetosphere and the atmosphere.

CME seen from one of SOHO’s coronographs. 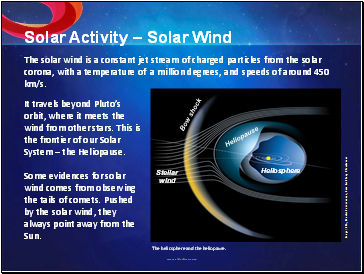 The solar wind is a constant jet stream of charged particles from the solar corona, with a temperature of a million degrees, and speeds of around 450 km/s.

The heliosphere and the heliopause.

It travels beyond Pluto’s orbit, where it meets the wind from other stars. This is the frontier of our Solar System – the Heliopause.

Some evidences for solar wind comes from observing the tails of comets. Pushed by the solar wind, they always point away from the Sun. 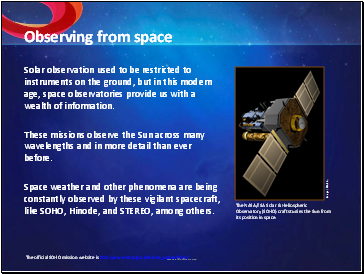 Solar observation used to be restricted to instruments on the ground, but in this modern age, space observatories provide us with a wealth of information.

These missions observe the Sun across many wavelengths and in more detail than ever before.

Space weather and other phenomena are being constantly observed by these vigilant spacecraft, like SOHO, Hinode, and STEREO, among others.

The NASA/ESA Solar & Heliospheric Observatory (SOHO) craft studies the Sun from its position in space.