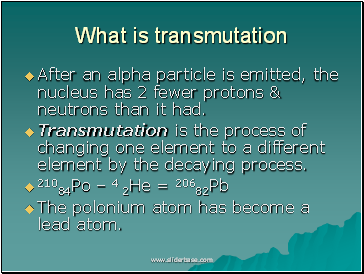 After an alpha particle is emitted, the nucleus has 2 fewer protons & neutrons than it had.

Transmutation is the process of changing one element to a different element by the decaying process.

The polonium atom has become a lead atom. 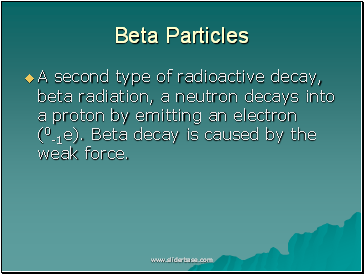 A second type of radioactive decay, beta radiation, a neutron decays into a proton by emitting an electron (0-1e). Beta decay is caused by the weak force. 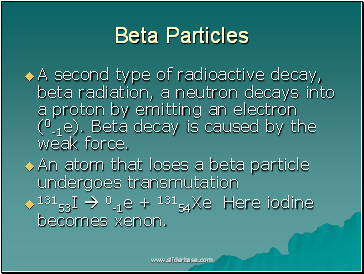 A second type of radioactive decay, beta radiation, a neutron decays into a proton by emitting an electron (0-1e). Beta decay is caused by the weak force.

An atom that loses a beta particle undergoes transmutation 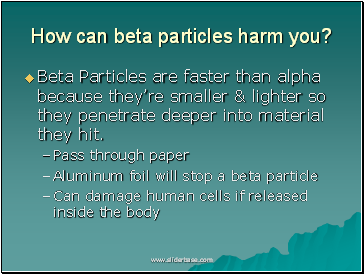 How can beta particles harm you?

Beta Particles are faster than alpha because they’re smaller & lighter so they penetrate deeper into material they hit.

Can damage human cells if released inside the body 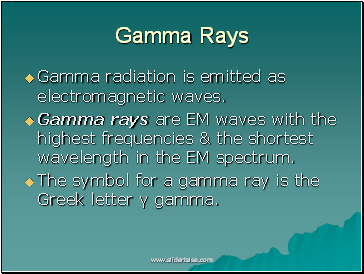 Gamma rays are EM waves with the highest frequencies & the shortest wavelength in the EM spectrum.

The symbol for a gamma ray is the Greek letter γ gamma. 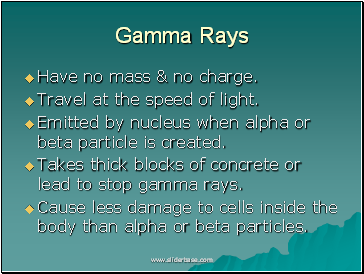 Have no mass & no charge.

Travel at the speed of light.

Emitted by nucleus when alpha or beta particle is created.

Cause less damage to cells inside the body than alpha or beta particles. 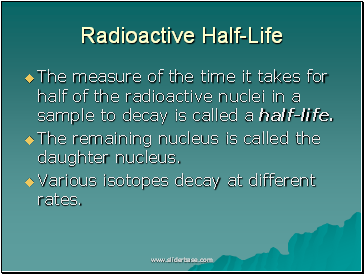 The measure of the time it takes for half of the radioactive nuclei in a sample to decay is called a half-life.

The remaining nucleus is called the daughter nucleus. 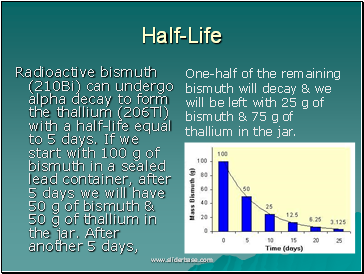 Radioactive bismuth (210Bi) can undergo alpha decay to form the thallium (206Tl) with a half-life equal to 5 days. If we start with 100 g of bismuth in a sealed lead container, after 5 days we will have 50 g of bismuth & 50 g of thallium in the jar. After another 5 days,

One-half of the remaining bismuth will decay & we will be left with 25 g of bismuth & 75 g of thallium in the jar.