A Sound of Thunder
Page
3

Before you read the story, think about the following questions:

How might your actions during your lifetime affect someone living one hundred years in the future?

Do you believe that you have a responsibility to future generations? 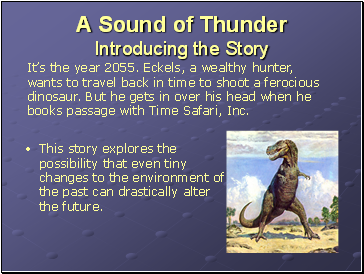 A Sound of Thunder Introducing the Story

It’s the year 2055. Eckels, a wealthy hunter, wants to travel back in time to shoot a ferocious dinosaur. But he gets in over his head when he books passage with Time Safari, Inc.

This story explores the possibility that even tiny changes to the environment of the past can drastically alter the future. 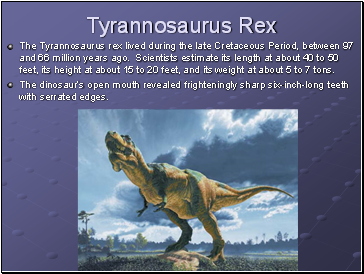 The Tyrannosaurus rex lived during the late Cretaceous Period, between 97 and 66 million years ago. Scientists estimate its length at about 40 to 50 feet, its height at about 15 to 20 feet, and its weight at about 5 to 7 tons. 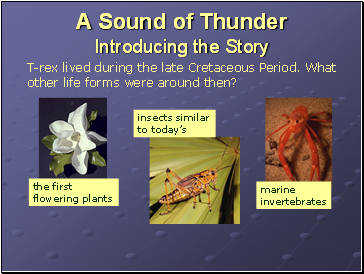 A Sound of Thunder Introducing the Story

T-rex lived during the late Cretaceous Period. What other life forms were around then? 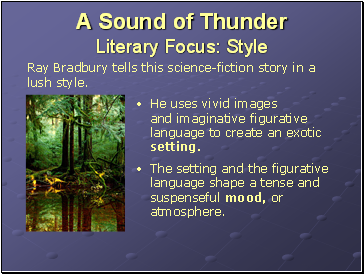 Ray Bradbury tells this science-fiction story in a lush style.

The setting and the figurative language shape a tense and suspenseful mood, or atmosphere.

He uses vivid images and imaginative figurative language to create an exotic setting. 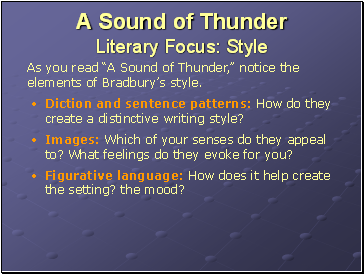 As you read “A Sound of Thunder,” notice the elements of Bradbury’s style.

Images: Which of your senses do they appeal to? What feelings do they evoke for you?

Diction and sentence patterns: How do they create a distinctive writing style?

Figurative language: How does it help create the setting? the mood? 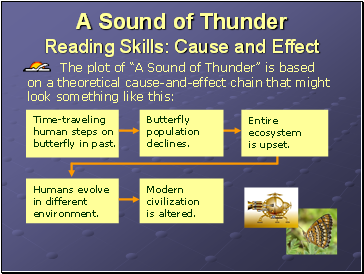 A Sound of Thunder Reading Skills: Cause and Effect

The plot of “A Sound of Thunder” is based on a theoretical cause-and-effect chain that might look something like this: 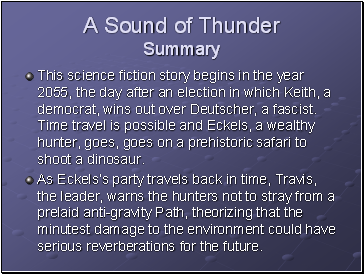 A Sound of Thunder Summary

This science fiction story begins in the year 2055, the day after an election in which Keith, a democrat, wins out over Deutscher, a fascist. Time travel is possible and Eckels, a wealthy hunter, goes, goes on a prehistoric safari to shoot a dinosaur.