He calculated the mass of the electron; that is very similar to the excepted mass given today. 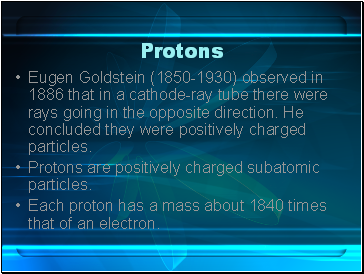 Eugen Goldstein (1850-1930) observed in 1886 that in a cathode-ray tube there were rays going in the opposite direction. He concluded they were positively charged particles.

Each proton has a mass about 1840 times that of an electron. 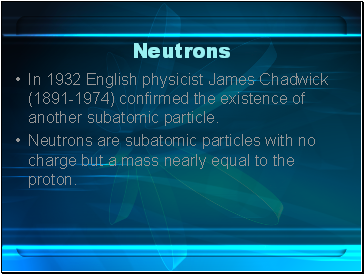 In 1932 English physicist James Chadwick (1891-1974) confirmed the existence of another subatomic particle.

Neutrons are subatomic particles with no charge but a mass nearly equal to the proton. 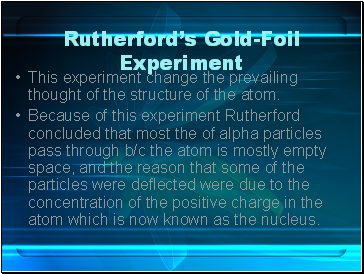 This experiment change the prevailing thought of the structure of the atom.

Because of this experiment Rutherford concluded that most the of alpha particles pass through b/c the atom is mostly empty space, and the reason that some of the particles were deflected were due to the concentration of the positive charge in the atom which is now known as the nucleus. 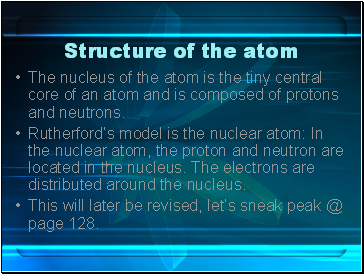 Structure of the atom

The nucleus of the atom is the tiny central core of an atom and is composed of protons and neutrons. 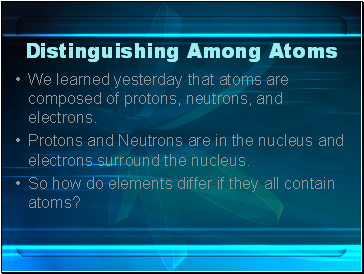 We learned yesterday that atoms are composed of protons, neutrons, and electrons.

Protons and Neutrons are in the nucleus and electrons surround the nucleus.

So how do elements differ if they all contain atoms? 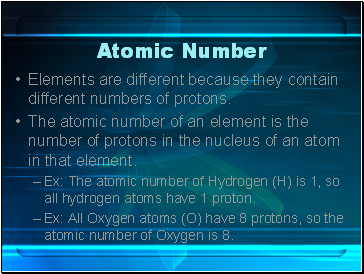 Elements are different because they contain different numbers of protons.

The atomic number of an element is the number of protons in the nucleus of an atom in that element.

Ex: The atomic number of Hydrogen (H) is 1, so all hydrogen atoms have 1 proton.

Ex: All Oxygen atoms (O) have 8 protons, so the atomic number of Oxygen is 8. 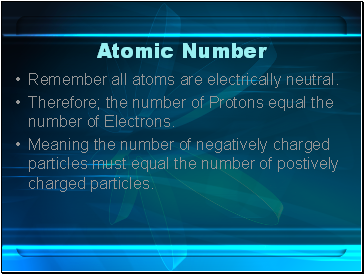 Remember all atoms are electrically neutral.