The largest is the Great Pyramid, built by King Khufu in about 2600 B.C.

It stands about 481 feet high and covers 13 acres.

The pyramids functioned as huge burial tombs for the Egyptians’ dead pharaohs and queens.

They used the Nile River like a highway to transport people and goods to foreign lands.

The first ships were made out of bundles of papyrus reeds tied together to make a canoe-like vessel.

As the ship trade flourished, the hulls of the ships were made of cedar, and oars and sails were added for greater speed.

These were pictures and symbols that served as one of the first written languages in the world.

It was based on the flooding of the Nile River. 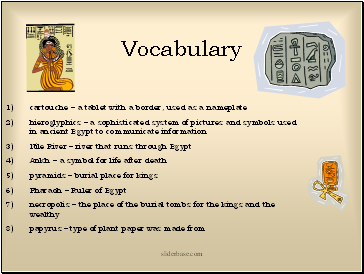 cartouche – a tablet with a border, used as a nameplate

Ankh – a symbol for life after death

papyrus – type of plant paper was made from 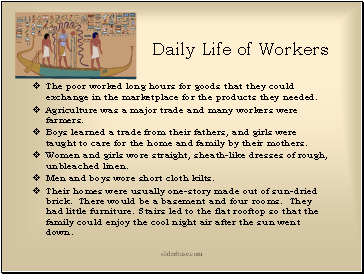 The poor worked long hours for goods that they could exchange in the marketplace for the products they needed.

Agriculture was a major trade and many workers were farmers.

Boys learned a trade from their fathers, and girls were taught to care for the home and family by their mothers.

Their homes were usually one-story made out of sun-dried brick. There would be a basement and four rooms. They had little furniture. Stairs led to the flat rooftop so that the family could enjoy the cool night air after the sun went down. 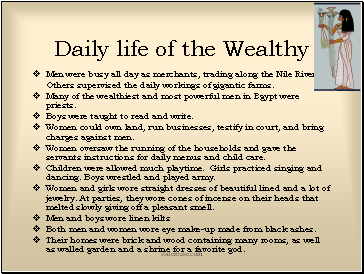 Daily life of the Wealthy

Men were busy all day as merchants, trading along the Nile River.

Others supervised the daily workings of gigantic farms.

Many of the wealthiest and most powerful men in Egypt were priests.

Boys were taught to read and write.

Women could own land, run businesses, testify in court, and bring charges against men.

Women oversaw the running of the households and gave the servants instructions for daily menus and child care.

Women and girls wore straight dresses of beautiful lined and a lot of jewelry. At parties, they wore cones of incense on their heads that melted slowly giving off a pleasant smell.