Both men and women wore eye make-up made from black ashes.

Their homes were brick and wood containing many rooms, as well as walled garden and a shrine for a favorite god. 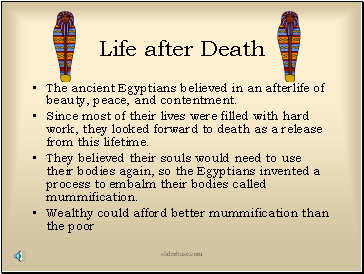 The ancient Egyptians believed in an afterlife of beauty, peace, and contentment.

Since most of their lives were filled with hard work, they looked forward to death as a release from this lifetime.

They believed their souls would need to use their bodies again, so the Egyptians invented a process to embalm their bodies called mummification.

Wealthy could afford better mummification than the poor 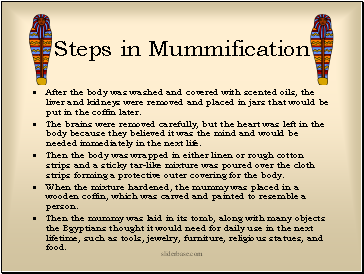 After the body was washed and covered with scented oils, the liver and kidneys were removed and placed in jars that would be put in the coffin later.

The brains were removed carefully, but the heart was left in the body because they believed it was the mind and would be needed immediately in the next life.

Then the body was wrapped in either linen or rough cotton strips and a sticky tar-like mixture was poured over the cloth strips forming a protective outer covering for the body.

When the mixture hardened, the mummy was placed in a wooden coffin, which was carved and painted to resemble a person.

Then the mummy was laid in its tomb, along with many objects the Egyptians thought it would need for daily use in the next lifetime, such as tools, jewelry, furniture, religious statues, and food. 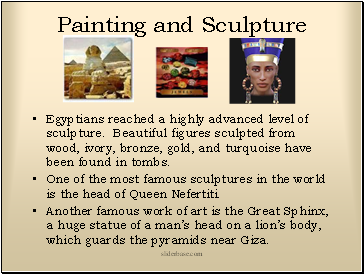 Egyptians reached a highly advanced level of sculpture. Beautiful figures sculpted from wood, ivory, bronze, gold, and turquoise have been found in tombs.

One of the most famous sculptures in the world is the head of Queen Nefertiti.

Another famous work of art is the Great Sphinx, a huge statue of a man’s head on a lion’s body, which guards the pyramids near Giza. 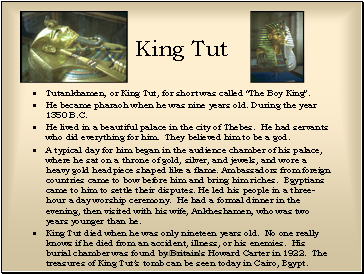 Tutankhamen, or King Tut, for short was called “The Boy King”.

He became pharaoh when he was nine years old. During the year 1350 B.C.

He lived in a beautiful palace in the city of Thebes. He had servants who did everything for him. They believed him to be a god.

A typical day for him began in the audience chamber of his palace, where he sat on a throne of gold, silver, and jewels, and wore a heavy gold headpiece shaped like a flame. Ambassadors from foreign countries came to bow before him and bring him riches. Egyptians came to him to settle their disputes. He led his people in a three-hour a day worship ceremony. He had a formal dinner in the evening, then visited with his wife, Ankheshamen, who was two years younger than he.