King Tut died when he was only nineteen years old. No one really knows if he died from an accident, illness, or his enemies. His burial chamber was found by Britain's Howard Carter in 1922. The treasures of King Tut’s tomb can be seen today in Cairo, Egypt. 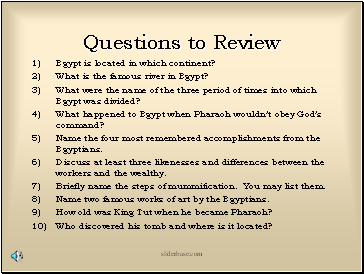 Egypt is located in which continent?

What is the famous river in Egypt?

What were the name of the three period of times into which Egypt was divided?

What happened to Egypt when Pharaoh wouldn’t obey God’s command?

Name the four most remembered accomplishments from the Egyptians.

Discuss at least three likenesses and differences between the workers and the wealthy.

Briefly name the steps of mummification. You may list them.

Name two famous works of art by the Egyptians.

How old was King Tut when he became Pharaoh?

Who discovered his tomb and where is it located?