Cody had fought the Indians many times as a scout, and it seems he had a rather paternalistic and even racist view of them, but he was never short of willing Indian performers for his show, and even had Sitting Bull appear for one season.

What the Indians thought of it all is, unfortunately, unknown. 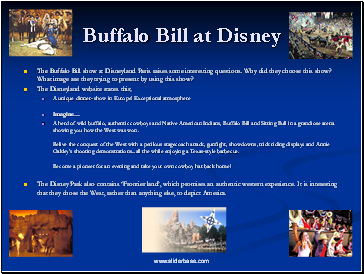 The Buffalo Bill show at Disneyland Paris raises some interesting questions. Why did they choose this show? What image are they trying to present by using this show?

A herd of wild buffalo, authentic cowboys and Native American Indians, Buffalo Bill and Sitting Bull in a grandiose arena showing you how the West was won. Relive the conquest of the West with a perilous stagecoach attack, gunfight, showdowns, trick riding displays and Annie Oakley's shooting demonstrations .all the while enjoying a Texas-style barbecue. Become a pioneer for an evening and take your own cowboy hat back home!

The Disney Park also contains ‘Frontier land’, which promises an authentic western experience. It is interesting that they chose the West, rather than anything else, to depict America. 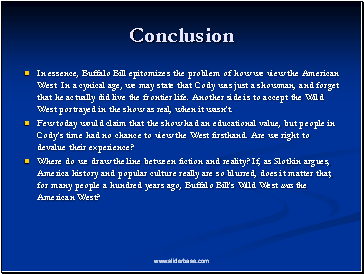 In essence, Buffalo Bill epitomizes the problem of how we view the American West. In a cynical age, we may state that Cody was just a showman, and forget that he actually did live the frontier life. Another side is to accept the Wild West portrayed in the show as real, when it wasn’t.

Few today would claim that the show had an educational value, but people in Cody’s time had no chance to view the West firsthand. Are we right to devalue their experience?

Where do we draw the line between fiction and reality? If, as Slotkin argues, America history and popular culture really are so blurred, does it matter that, for many people a hundred years ago, Buffalo Bill’s Wild West was the American West?