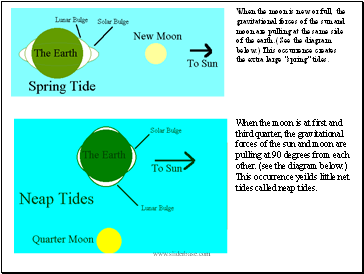 When the moon is new or full, the gravitational forces of the sun and moon are pulling at the same side of the earth. (See the diagram below.) This occurrence creates the extra large "spring" tides.

When the moon is at first and third quarter, the gravitational forces of the sun and moon are pulling at 90 degrees from each other. (see the diagram below.) This occurrence yeilds little net tides called neap tides. 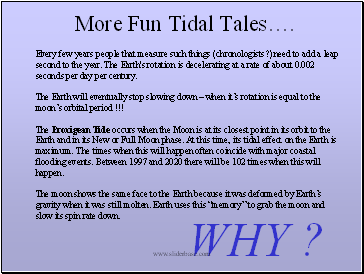 Every few years people that measure such things (chronologists?) need to add a leap second to the year. The Earth's rotation is decelerating at a rate of about 0.002 seconds per day per century.

The Earth will eventually stop slowing down – when it’s rotation is equal to the moon’s orbital period !!!

The moon shows the same face to the Earth because it was deformed by Earth’s gravity when it was still molten. Earth uses this “memory” to grab the moon and slow its spin rate down.