A small number of elements make up >99% of the solid Earth. 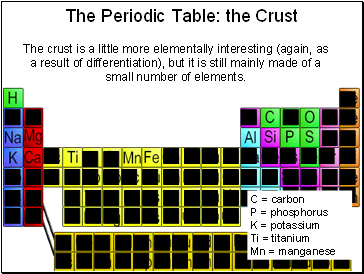 The Periodic Table: the Crust

The crust is a little more elementally interesting (again, as a result of differentiation), but it is still mainly made of a small number of elements. 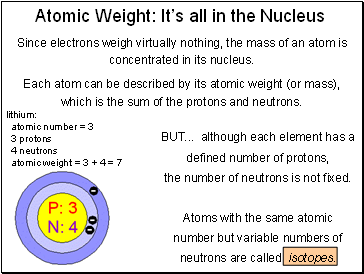 Atomic Weight: It’s all in the Nucleus

Since electrons weigh virtually nothing, the mass of an atom is concentrated in its nucleus.

Each atom can be described by its atomic weight (or mass),

which is the sum of the protons and neutrons.

BUT . although each element has a defined number of protons,

the number of neutrons is not fixed.

Atoms with the same atomic number but variable numbers of neutrons are called isotopes. 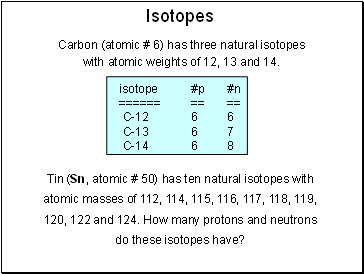 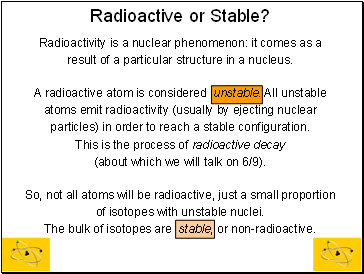 Radioactivity is a nuclear phenomenon: it comes as a result of a particular structure in a nucleus.

A radioactive atom is considered unstable. All unstable atoms emit radioactivity (usually by ejecting nuclear particles) in order to reach a stable configuration.

This is the process of radioactive decay

So, not all atoms will be radioactive, just a small proportion of isotopes with unstable nuclei.

The bulk of isotopes are stable, or non-radioactive. 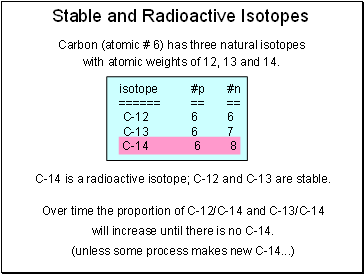 will increase until there is no C-14. 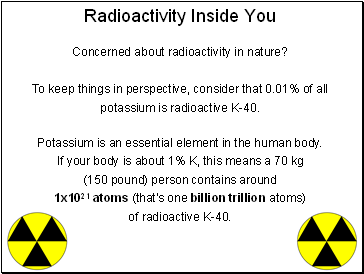