Beyond the Foreshore of some beaches is a backshore zone, characterized by dunes. Dunes are constructed by windblown sediment transported from the foreshore and elsewhere.

Sediment can also be transported to the backshore area during storms, when big waves can reach far inland (note that a storm beach face can be seen well away from the normal beach face). 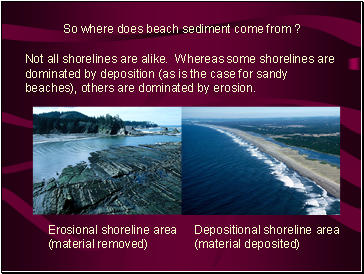 So where does beach sediment come from ? 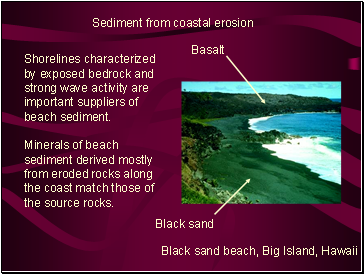 Minerals of beach sediment derived mostly from eroded rocks along the coast match those of the source rocks. 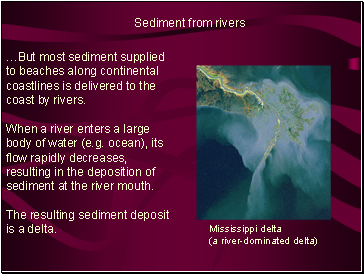 …But most sediment supplied to beaches along continental coastlines is delivered to the coast by rivers.

When a river enters a large body of water (e.g. ocean), its flow rapidly decreases, resulting in the deposition of sediment at the river mouth.

The resulting sediment deposit is a delta. 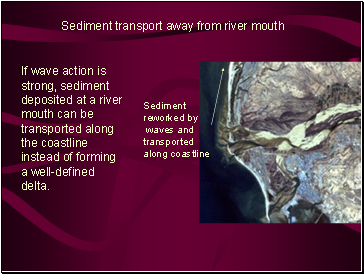 Sediment transport away from river mouth

If wave action is strong, sediment deposited at a river mouth can be transported along the coastline instead of forming a well-defined delta. 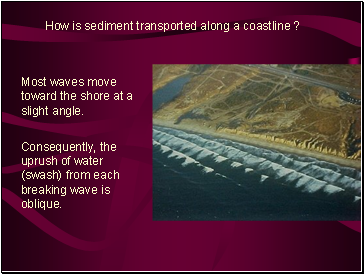 How is sediment transported along a coastline ?

Most waves move toward the shore at a slight angle.

Consequently, the uprush of water (swash) from each breaking wave is oblique. 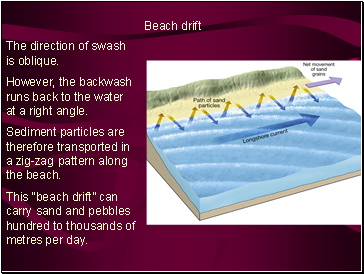 The direction of swash is oblique.

However, the backwash runs back to the water at a right angle.

Sediment particles are therefore transported in a zig-zag pattern along the beach.

This “beach drift” can carry sand and pebbles hundred to thousands of metres per day. 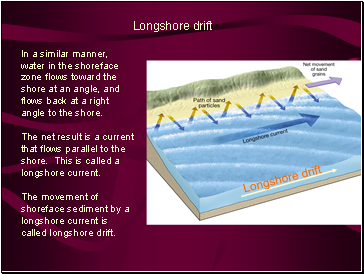 In a similar manner, water in the shoreface zone flows toward the shore at an angle, and flows back at a right angle to the shore.