The net result is a current that flows parallel to the shore. This is called a longshore current.

The movement of shoreface sediment by a longshore current is called longshore drift. 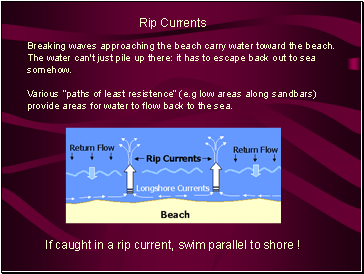 Breaking waves approaching the beach carry water toward the beach. The water can't just pile up there: it has to escape back out to sea somehow.

Various “paths of least resistence” (e.g low areas along sandbars) provide areas for water to flow back to the sea.

If caught in a rip current, swim parallel to shore ! 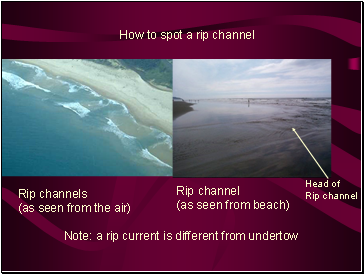 How to spot a rip channel

(as seen from the air)

(as seen from beach)

Note: a rip current is different from undertow 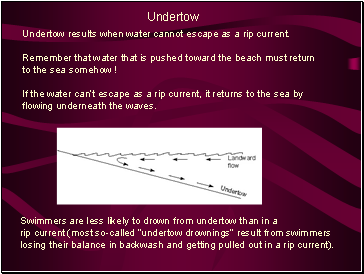 Undertow results when water cannot escape as a rip current.

Remember that water that is pushed toward the beach must return to the sea somehow !

If the water can’t escape as a rip current, it returns to the sea by flowing underneath the waves.

Swimmers are less likely to drown from undertow than in a

rip current (most so-called “undertow drownings” result from swimmers losing their balance in backwash and getting pulled out in a rip current). 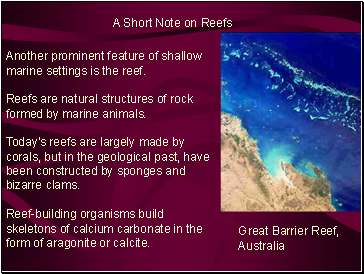 A Short Note on Reefs

Another prominent feature of shallow marine settings is the reef.

Reefs are natural structures of rock formed by marine animals.

Today’s reefs are largely made by corals, but in the geological past, have been constructed by sponges and bizarre clams.

Reef-building organisms build skeletons of calcium carbonate in the form of aragonite or calcite. 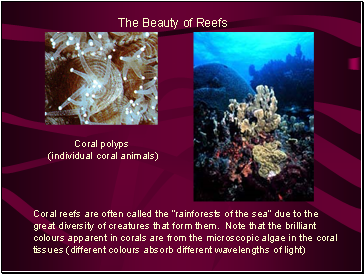 The Beauty of Reefs

great diversity of creatures that form them. Note that the brilliant colours apparent in corals are from the microscopic algae in the coral tissues (different colours absorb different wavelengths of light) 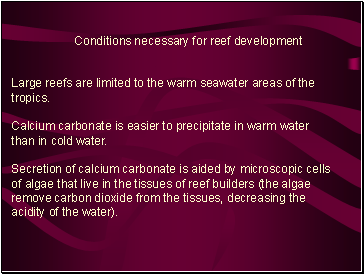 Large reefs are limited to the warm seawater areas of the tropics.

Calcium carbonate is easier to precipitate in warm water than in cold water.

Secretion of calcium carbonate is aided by microscopic cells of algae that live in the tissues of reef builders (the algae remove carbon dioxide from the tissues, decreasing the acidity of the water).