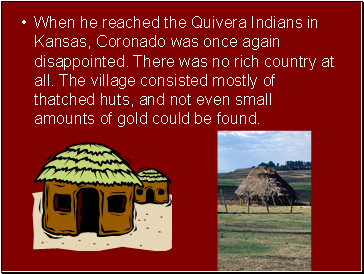 When he reached the Quivera Indians in Kansas, Coronado was once again disappointed. There was no rich country at all. The village consisted mostly of thatched huts, and not even small amounts of gold could be found. 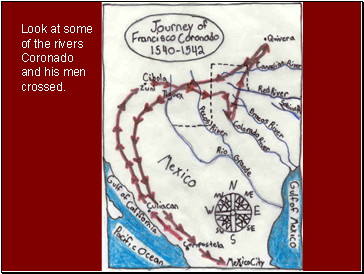 Look at some of the rivers Coronado and his men crossed. 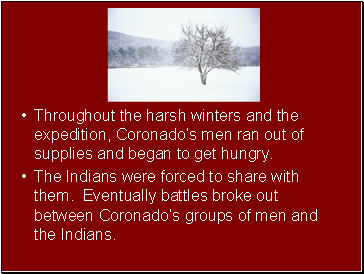 Throughout the harsh winters and the expedition, Coronado’s men ran out of supplies and began to get hungry.

The Indians were forced to share with them. Eventually battles broke out between Coronado’s groups of men and the Indians. 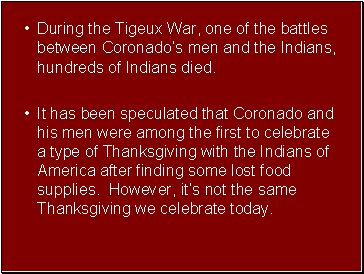 During the Tigeux War, one of the battles between Coronado’s men and the Indians, hundreds of Indians died.

It has been speculated that Coronado and his men were among the first to celebrate a type of Thanksgiving with the Indians of America after finding some lost food supplies. However, it’s not the same Thanksgiving we celebrate today. 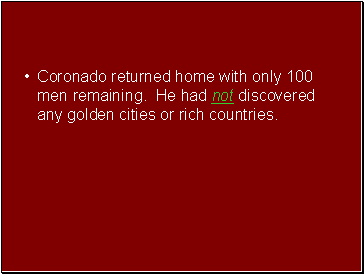 Coronado returned home with only 100 men remaining. He had not discovered any golden cities or rich countries. 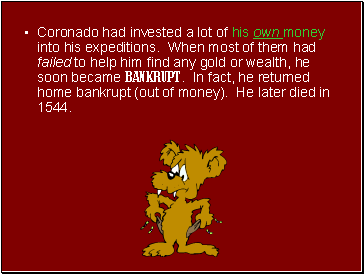 Coronado had invested a lot of his own money into his expeditions. When most of them had failed to help him find any gold or wealth, he soon became BANKRUPT. In fact, he returned home bankrupt (out of money). He later died in 1544. 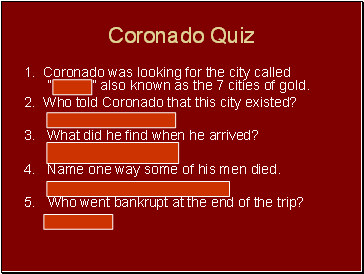 1. Coronado was looking for the city called “Cibola” also known as the 7 cities of gold.

2. Who told Coronado that this city existed?

3. What did he find when he arrived?

Pueblos and no gold

4. Name one way some of his men died.

5. Who went bankrupt at the end of the trip? 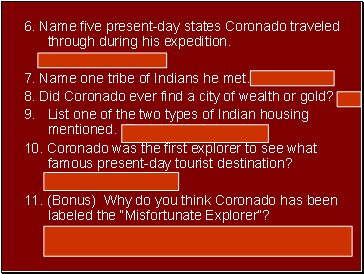 6. Name five present-day states Coronado traveled through during his expedition.

7. Name one tribe of Indians he met. Zuni/Quivera

8. Did Coronado ever find a city of wealth or gold? no

List one of the two types of Indian housing mentioned. Thatched huts/pueblos

10. Coronado was the first explorer to see what famous present-day tourist destination?

11. (Bonus) Why do you think Coronado has been labeled the “Misfortunate Explorer”?

He didn’t find what he searched for; lost all of his money; a lot of his men died.