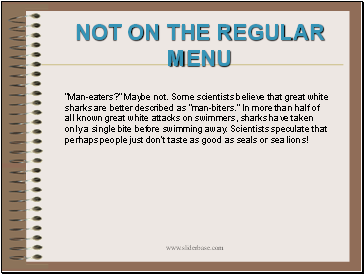 “Man-eaters?” Maybe not. Some scientists believe that great white sharks are better described as “man-biters.” In more than half of all known great white attacks on swimmers, sharks have taken only a single bite before swimming away. Scientists speculate that perhaps people just don’t taste as good as seals or sea lions!

Not On The Regular Menu 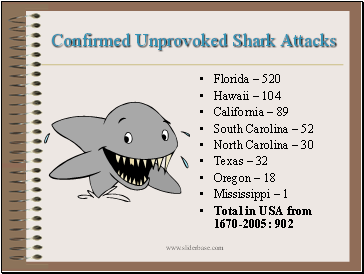 What is a Shark?

Sharks are amazing fish that have been around since long before the dinosaurs existed. They live in waters all over the world, in every ocean, and even in some rivers and lakes. Unlike bony fish, sharks have no bones; their skeleton is made of cartilage, which is a tough, fibrous substance, not nearly as hard as bone. Sharks also have no swim bladder (unlike bony fish). 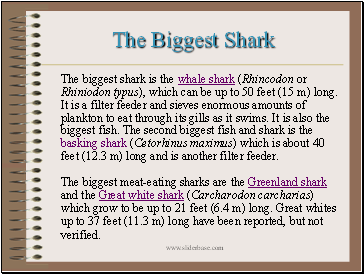 The biggest shark is the whale shark (Rhincodon or Rhiniodon typus), which can be up to 50 feet (15 m) long. It is a filter feeder and sieves enormous amounts of plankton to eat through its gills as it swims. It is also the biggest fish. The second biggest fish and shark is the basking shark (Cetorhinus maximus) which is about 40 feet (12.3 m) long and is another filter feeder. The biggest meat-eating sharks are the Greenland shark and the Great white shark (Carcharodon carcharias) which grow to be up to 21 feet (6.4 m) long. Great whites up to 37 feet (11.3 m) long have been reported, but not verified. 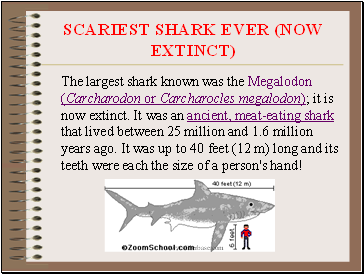 The largest shark known was the Megalodon (Carcharodon or Carcharocles megalodon); it is now extinct. It was an ancient, meat-eating shark that lived between 25 million and 1.6 million years ago. It was up to 40 feet (12 m) long and its teeth were each the size of a person's hand! 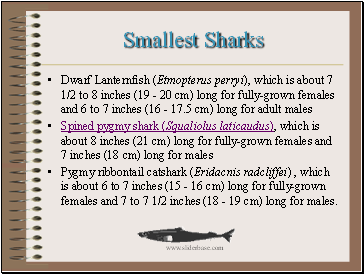 Spined pygmy shark (Squaliolus laticaudus), which is about 8 inches (21 cm) long for fully-grown females and 7 inches (18 cm) long for males