Given the antiquity of the earth and a scheme by which life forms had changed, how old was the human species?

association of extinct fauna and stone tools could not be explained with catastrophism.

published findings in 1847, was considered a heretic.

Later: Others investigated results and found them conclusive, established by 1860 the long and changing history of humankind. 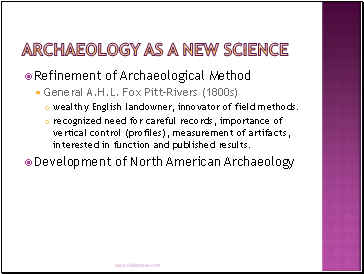 Archaeology as a New Science 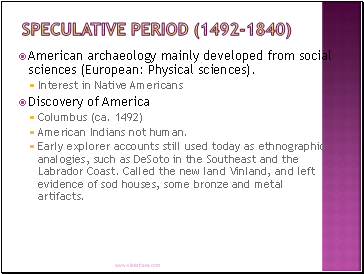 Early explorer accounts still used today as ethnographic analogies, such as DeSoto in the Southeast and the Labrador Coast. Called the new land Vinland, and left evidence of sod houses, some bronze and metal artifacts. 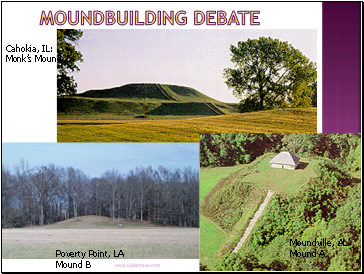 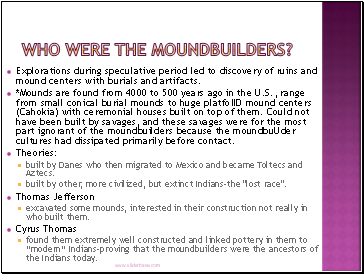 Explorations during speculative period led to discovery of ruins and mound centers with burials and artifacts.

*Mounds are found from 4000 to 500 years ago in the U.S., range from small conical burial mounds to huge platfoIlD mound centers (Cahokia) with ceremonial houses built on top of them. Could not have been built by savages, and these savages were for the most part ignorant of the moundbuilders because the moundbuUder cultures had dissipated primarily before contact.

built by Danes who then migrated to Mexico and became Toltecs and Aztecs.

built by other, more civilized, but extinct Indians-the "lost race".

excavated some mounds, interested in their construction not really in who built them.

found them extremely well constructed and linked pottery in them to “modern” Indians-proving that the moundbuilders were the ancestors of the Indians today.