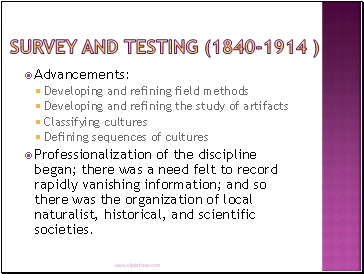 Developing and refining the study of artifacts

Professionalization of the discipline began; there was a need felt to record rapidly vanishing information; and so there was the organization of local naturalist, historical, and scientific societies. 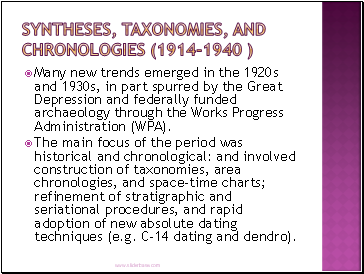 Many new trends emerged in the 1920s and 1930s, in part spurred by the Great Depression and federally funded archaeology through the Works Progress Administration (WPA).

The main focus of the period was historical and chronological: and involved construction of taxonomies, area chronologies, and space-time charts; refinement of stratigraphic and seriational procedures, and rapid adoption of new absolute dating techniques (e.g. C-14 dating and dendro). 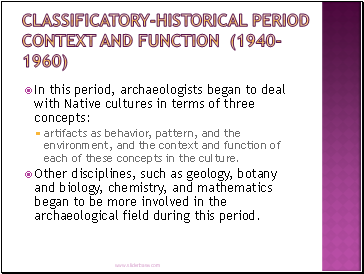 In this period, archaeologists began to deal with Native cultures in terms of three concepts:

artifacts as behavior, pattern, and the environment, and the context and function of each of these concepts in the culture.

Other disciplines, such as geology, botany and biology, chemistry, and mathematics began to be more involved in the archaeological field during this period. 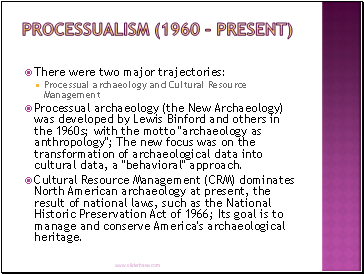 There were two major trajectories:

Processual archaeology (the New Archaeology) was developed by Lewis Binford and others in the 1960s; with the motto "archaeology as anthropology"; The new focus was on the transformation of archaeological data into cultural data, a "behavioral" approach.

Cultural Resource Management (CRM) dominates North American archaeology at present, the result of national laws, such as the National Historic Preservation Act of 1966; Its goal is to manage and conserve America's archaeological heritage. 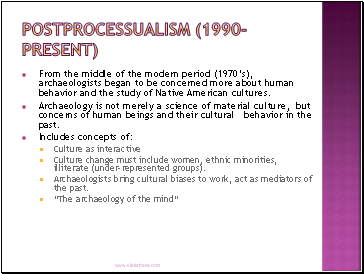 From the middle of the modern period (1970’s), archaeologists began to be concerned more about human behavior and the study of Native American cultures.

Archaeology is not merely a science of material culture, but concerns of human beings and their cultural behavior in the past.