The Waltham plan found a solution to competing with cheap British imports by hiring women and girls who could be paid less than men. The Waltham factory used waterpower--but was not the first to do so--and hired mostly unskilled labor, not skilled mechanics. It was a textile mill and did not produce flour. 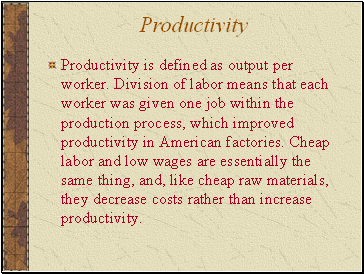 Productivity is defined as output per worker. Division of labor means that each worker was given one job within the production process, which improved productivity in American factories. Cheap labor and low wages are essentially the same thing, and, like cheap raw materials, they decrease costs rather than increase productivity. 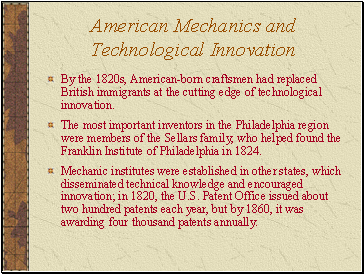 By the 1820s, American-born craftsmen had replaced British immigrants at the cutting edge of technological innovation.

The most important inventors in the Philadelphia region were members of the Sellars family, who helped found the Franklin Institute of Philadelphia in 1824.

Mechanic institutes were established in other states, which disseminated technical knowledge and encouraged innovation; in 1820, the U.S. Patent Office issued about two hundred patents each year, but by 1860, it was awarding four thousand patents annually. 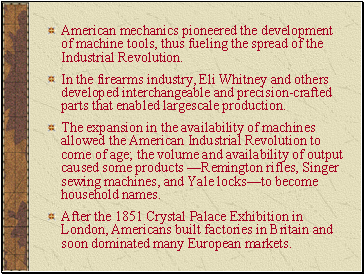 American mechanics pioneered the development of machine tools, thus fueling the spread of the Industrial Revolution.

In the firearms industry, Eli Whitney and others developed interchangeable and precision-crafted parts that enabled largescale production.

The expansion in the availability of machines allowed the American Industrial Revolution to come of age; the volume and availability of output caused some products —Remington rifles, Singer sewing machines, and Yale locks—to become household names.

After the 1851 Crystal Palace Exhibition in London, Americans built factories in Britain and soon dominated many European markets. 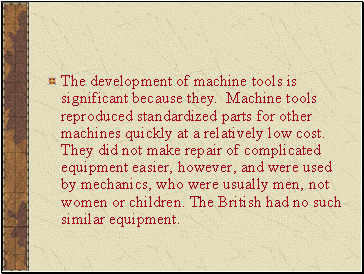 The development of machine tools is significant because they. Machine tools reproduced standardized parts for other machines quickly at a relatively low cost. They did not make repair of complicated equipment easier, however, and were used by mechanics, who were usually men, not women or children. The British had no such similar equipment. 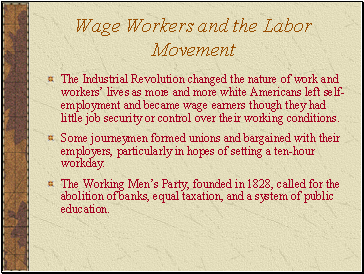 Wage Workers and the Labor Movement

The Industrial Revolution changed the nature of work and workers’ lives as more and more white Americans left self-employment and became wage earners though they had little job security or control over their working conditions.