Due to the expansion of industry and trade, the urban population grew fourfold between 1820 and 1840.

The most rapid growth occurred in the new industrial towns that sprang up along the fall line; for example: Lowell, Massachusetts; Hartford, Connecticut; Trenton, New Jersey; and Wilmington, Delaware. 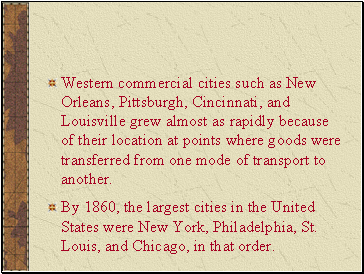 Western commercial cities such as New Orleans, Pittsburgh, Cincinnati, and Louisville grew almost as rapidly because of their location at points where goods were transferred from one mode of transport to another.

By 1860, the largest cities in the United States were New York, Philadelphia, St. Louis, and Chicago, in that order. 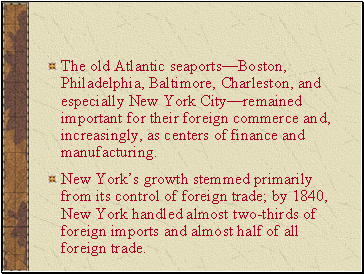 The old Atlantic seaports—Boston, Philadelphia, Baltimore, Charleston, and especially New York City—remained important for their foreign commerce and, increasingly, as centers of finance and manufacturing.

New York’s growth stemmed primarily from its control of foreign trade; by 1840, New York handled almost two-thirds of foreign imports and almost half of all foreign trade. 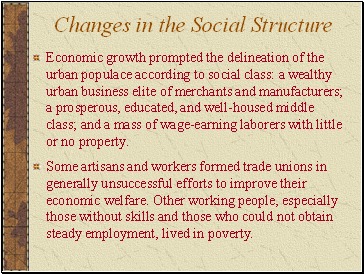 Changes in the Social Structure

Economic growth prompted the delineation of the urban populace according to social class: a wealthy urban business elite of merchants and manufacturers; a prosperous, educated, and well-housed middle class; and a mass of wage-earning laborers with little or no property.

Some artisans and workers formed trade unions in generally unsuccessful efforts to improve their economic welfare. Other working people, especially those without skills and those who could not obtain steady employment, lived in poverty. 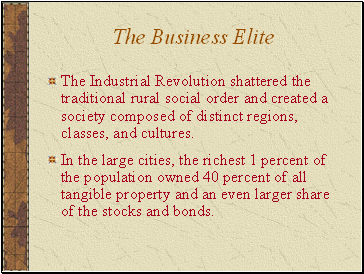 The Industrial Revolution shattered the traditional rural social order and created a society composed of distinct regions, classes, and cultures.

In the large cities, the richest 1 percent of the population owned 40 percent of all tangible property and an even larger share of the stocks and bonds. 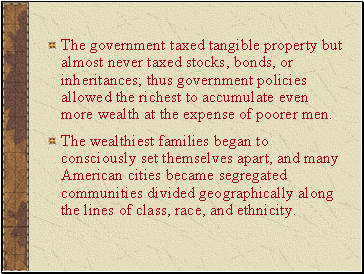 The government taxed tangible property but almost never taxed stocks, bonds, or inheritances; thus government policies allowed the richest to accumulate even more wealth at the expense of poorer men.

The wealthiest families began to consciously set themselves apart, and many American cities became segregated communities divided geographically along the lines of class, race, and ethnicity. 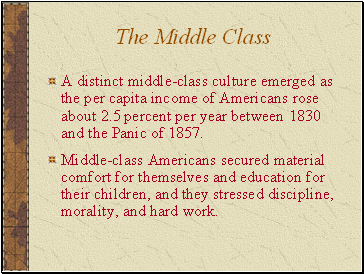 A distinct middle-class culture emerged as the per capita income of Americans rose about 2.5 percent per year between 1830 and the Panic of 1857.