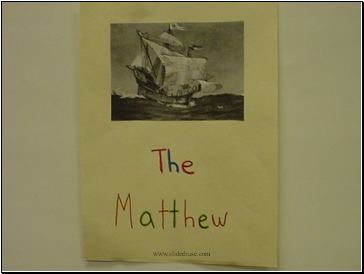 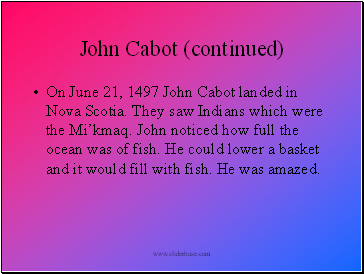 On June 21, 1497 John Cabot landed in Nova Scotia. They saw Indians which were the Mi’kmaq. John noticed how full the ocean was of fish. He could lower a basket and it would fill with fish. He was amazed. 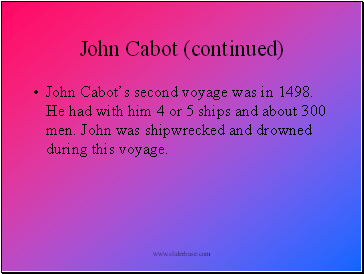 John Cabot’s second voyage was in 1498. He had with him 4 or 5 ships and about 300 men. John was shipwrecked and drowned during this voyage. 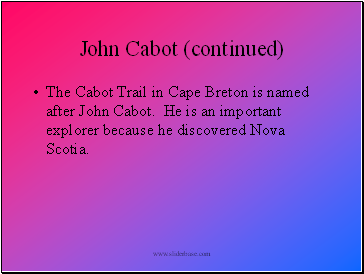 The Cabot Trail in Cape Breton is named after John Cabot. He is an important explorer because he discovered Nova Scotia. 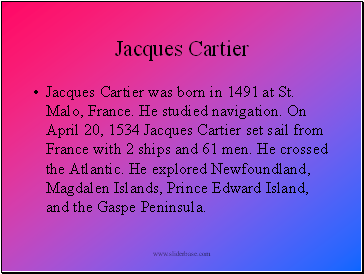 Jacques Cartier was born in 1491 at St. Malo, France. He studied navigation. On April 20, 1534 Jacques Cartier set sail from France with 2 ships and 61 men. He crossed the Atlantic. He explored Newfoundland, Magdalen Islands, Prince Edward Island, and the Gaspe Peninsula.

Cartier traded with the Mi’kmaq and Iroquois. He was responsible for starting the fur trade in the new world.

Cartier had many voyages from France to Canada. He was the first explorer to sail down the St. Lawrence River. He established the first French settlement in Canada. He gave Canada its name. 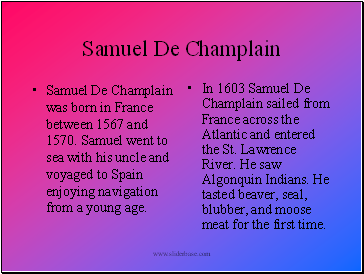 Samuel De Champlain was born in France between 1567 and 1570. Samuel went to sea with his uncle and voyaged to Spain enjoying navigation from a young age.

In 1603 Samuel De Champlain sailed from France across the Atlantic and entered the St. Lawrence River. He saw Algonquin Indians. He tasted beaver, seal, blubber, and moose meat for the first time. 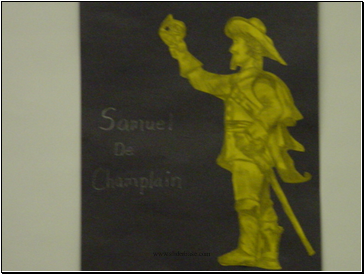 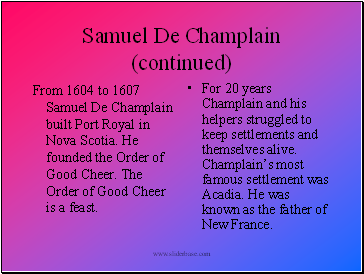 For 20 years Champlain and his helpers struggled to keep settlements and themselves alive. Champlain’s most famous settlement was Acadia. He was known as the father of New France.