Pisces is an ancient constellation derived, some say, from the story of the terrible Greek god Typhon.

(This is not the Chinese word for "big wind", which - in English - is of course spelled "typhoon". The French, however, spell this word "typhon", which adds to the confusion. It is possible that the Chinese borrowed the word from the Greek. The modern Greek equivalent is spelled "tau upsilon phi omega nu" and means "cyclone".) 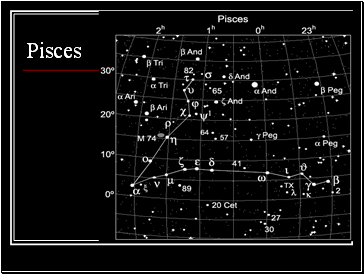 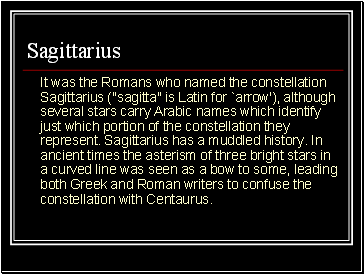 It was the Romans who named the constellation Sagittarius ("sagitta" is Latin for `arrow'), although several stars carry Arabic names which identify just which portion of the constellation they represent. Sagittarius has a muddled history. In ancient times the asterism of three bright stars in a curved line was seen as a bow to some, leading both Greek and Roman writers to confuse the constellation with Centaurus. 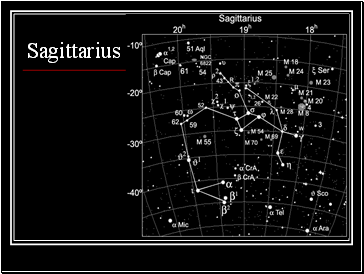 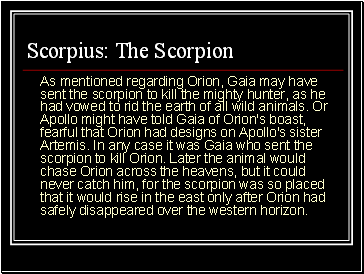 As mentioned regarding Orion, Gaia may have sent the scorpion to kill the mighty hunter, as he had vowed to rid the earth of all wild animals. Or Apollo might have told Gaia of Orion's boast, fearful that Orion had designs on Apollo's sister Artemis. In any case it was Gaia who sent the scorpion to kill Orion. Later the animal would chase Orion across the heavens, but it could never catch him, for the scorpion was so placed that it would rise in the east only after Orion had safely disappeared over the western horizon. 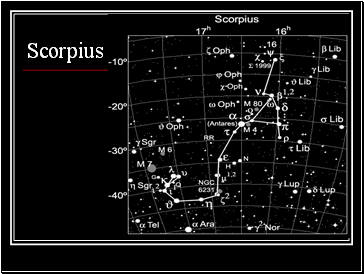 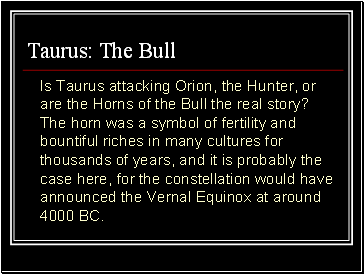 Is Taurus attacking Orion, the Hunter, or are the Horns of the Bull the real story? The horn was a symbol of fertility and bountiful riches in many cultures for thousands of years, and it is probably the case here, for the constellation would have announced the Vernal Equinox at around 4000 BC. 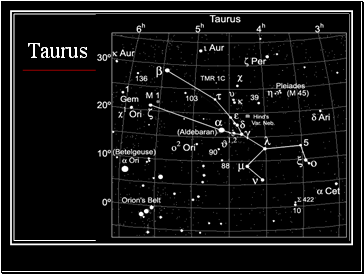 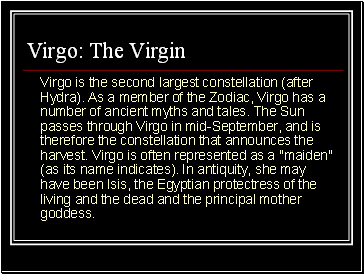 Virgo is the second largest constellation (after Hydra). As a member of the Zodiac, Virgo has a number of ancient myths and tales. The Sun passes through Virgo in mid-September, and is therefore the constellation that announces the harvest. Virgo is often represented as a "maiden" (as its name indicates). In antiquity, she may have been Isis, the Egyptian protectress of the living and the dead and the principal mother goddess.