The Sun A Nuclear Powerhouse
Page
5

They take less than 8.5 minutes to travel the distance from the Sun to the Earth. 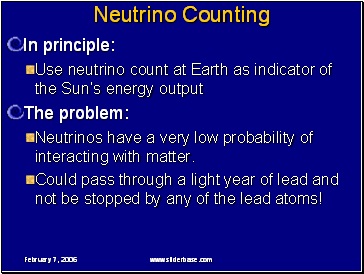 Neutrinos have a very low probability of interacting with matter.

Could pass through a light year of lead and not be stopped by any of the lead atoms! 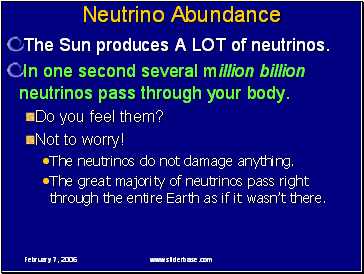 The Sun produces A LOT of neutrinos.

In one second several million billion neutrinos pass through your body.

Do you feel them?

The neutrinos do not damage anything.

The great majority of neutrinos pass right through the entire Earth as if it wasn’t there. 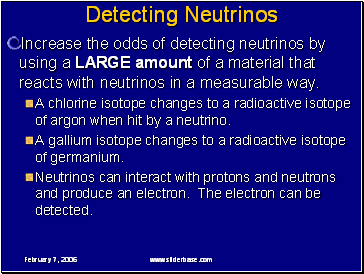 Increase the odds of detecting neutrinos by using a LARGE amount of a material that reacts with neutrinos in a measurable way.

A chlorine isotope changes to a radioactive isotope of argon when hit by a neutrino.

A gallium isotope changes to a radioactive isotope of germanium.

Neutrinos can interact with protons and neutrons and produce an electron. The electron can be detected. 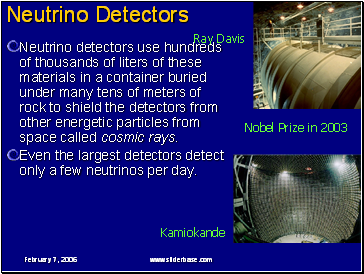 Neutrino detectors use hundreds of thousands of liters of these materials in a container buried under many tens of meters of rock to shield the detectors from other energetic particles from space called cosmic rays.

Even the largest detectors detect only a few neutrinos per day. 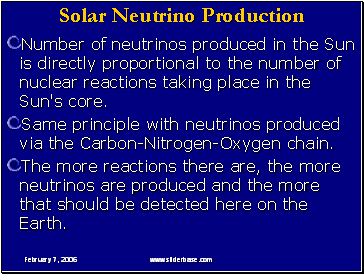 Number of neutrinos produced in the Sun is directly proportional to the number of nuclear reactions taking place in the Sun's core.

Same principle with neutrinos produced via the Carbon-Nitrogen-Oxygen chain.

The more reactions there are, the more neutrinos are produced and the more that should be detected here on the Earth. 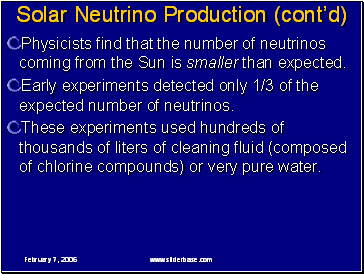 Physicists find that the number of neutrinos coming from the Sun is smaller than expected.

Early experiments detected only 1/3 of the expected number of neutrinos.

These experiments used hundreds of thousands of liters of cleaning fluid (composed of chlorine compounds) or very pure water. 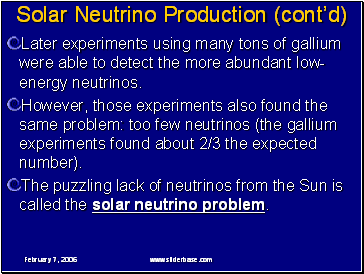 Later experiments using many tons of gallium were able to detect the more abundant low-energy neutrinos.