The Sun A Nuclear Powerhouse
Page
6

However, those experiments also found the same problem: too few neutrinos (the gallium experiments found about 2/3 the expected number).

The puzzling lack of neutrinos from the Sun is called the solar neutrino problem. 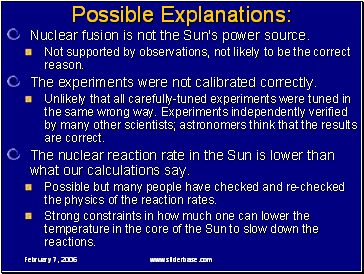 Nuclear fusion is not the Sun's power source.

Not supported by observations, not likely to be the correct reason.

The experiments were not calibrated correctly.

Unlikely that all carefully-tuned experiments were tuned in the same wrong way. Experiments independently verified by many other scientists; astronomers think that the results are correct.

The nuclear reaction rate in the Sun is lower than what our calculations say.

Possible but many people have checked and re-checked the physics of the reaction rates.

Strong constraints in how much one can lower the temperature in the core of the Sun to slow down the reactions. 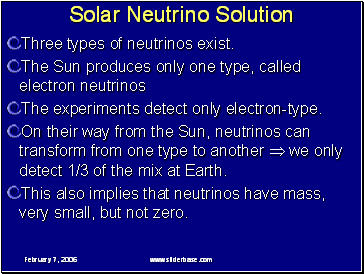 The Sun produces only one type, called electron neutrinos

The experiments detect only electron-type.

On their way from the Sun, neutrinos can transform from one type to another  we only detect 1/3 of the mix at Earth.

This also implies that neutrinos have mass, very small, but not zero. 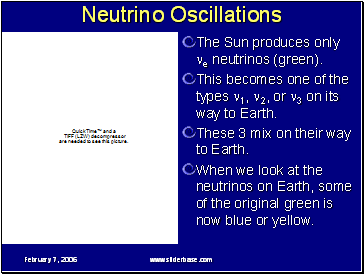 These 3 mix on their way to Earth.

When we look at the neutrinos on Earth, some of the original green is now blue or yellow.