The Sun A Nuclear Powerhouse
Page
2

Nuclear physics deals with the structure of the nuclei of atoms.

The special theory of relativity deals with the behavior of things moving at close to the speed of light. 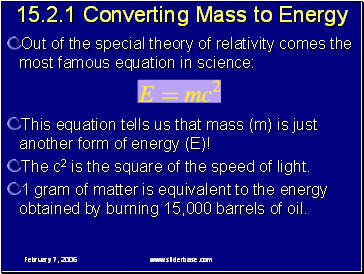 Out of the special theory of relativity comes the most famous equation in science:

This equation tells us that mass (m) is just another form of energy (E)!

The c2 is the square of the speed of light.

1 gram of matter is equivalent to the energy obtained by burning 15,000 barrels of oil. 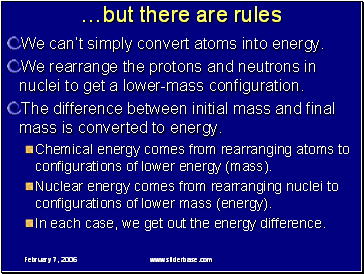 …but there are rules

We rearrange the protons and neutrons in nuclei to get a lower-mass configuration.

The difference between initial mass and final mass is converted to energy.

In each case, we get out the energy difference. 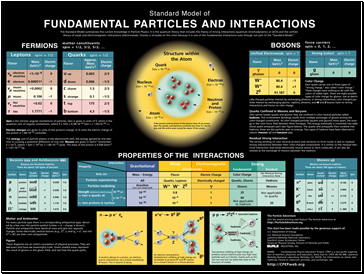 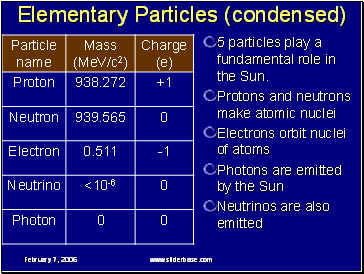 5 particles play a fundamental role in the Sun.

Photons are emitted by the Sun 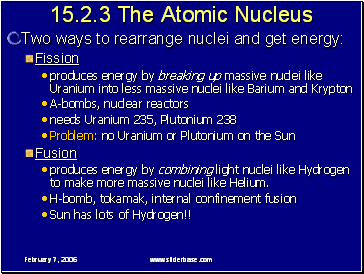 Two ways to rearrange nuclei and get energy:

Problem: no Uranium or Plutonium on the Sun

Sun has lots of Hydrogen!! 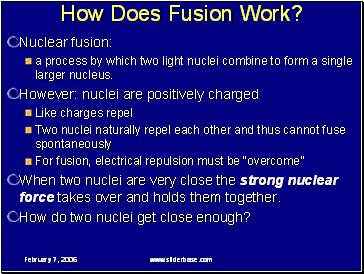 How Does Fusion Work?

a process by which two light nuclei combine to form a single larger nucleus.

However: nuclei are positively charged

For fusion, electrical repulsion must be “overcome”

When two nuclei are very close the strong nuclear force takes over and holds them together.

How do two nuclei get close enough? 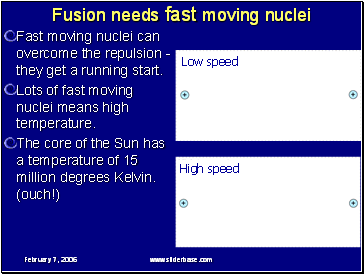 Fast moving nuclei can overcome the repulsion - they get a running start.