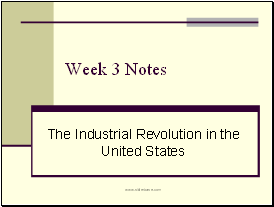 The Industrial Revolution in the United States 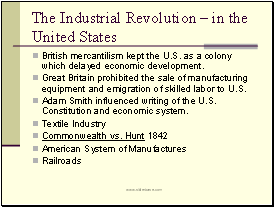 The Industrial Revolution – in the United States

British mercantilism kept the U.S. as a colony which delayed economic development.

Great Britain prohibited the sale of manufacturing equipment and emigration of skilled labor to U.S. 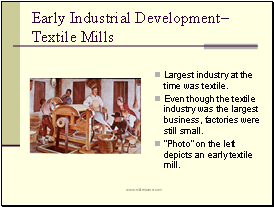 Largest industry at the time was textile.

Even though the textile industry was the largest business, factories were still small.

“Photo” on the left depicts an early textile mill. 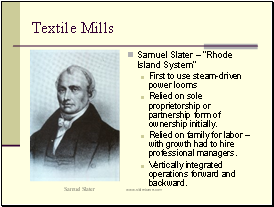 First to use steam-driven power looms

Relied on sole proprietorship or partnership form of ownership initially.

Relied on family for labor – with growth had to hire professional managers. 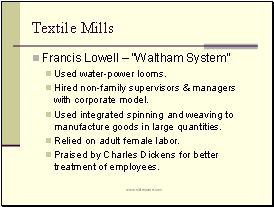 Praised by Charles Dickens for better treatment of employees. 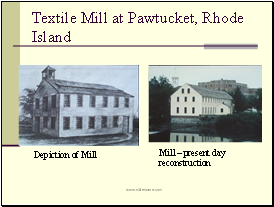 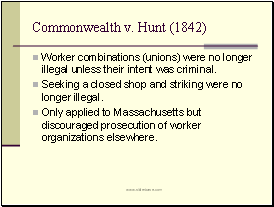 Worker combinations (unions) were no longer illegal unless their intent was criminal.

Seeking a closed shop and striking were no longer illegal.

Only applied to Massachusetts but discouraged prosecution of worker organizations elsewhere. 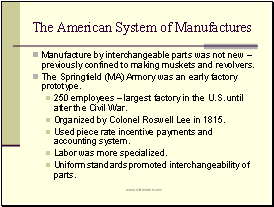 Manufacture by interchangeable parts was not new – previously confined to making muskets and revolvers.

The Springfield (MA) Armory was an early factory prototype.