250 employees – largest factory in the U.S. until after the Civil War.

Organized by Colonel Roswell Lee in 1815. 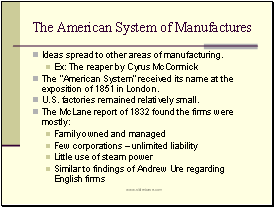 Ideas spread to other areas of manufacturing.

Ex: The reaper by Cyrus McCormick

The “American System” received its name at the exposition of 1851 in London.

The McLane report of 1832 found the firms were mostly:

Little use of steam power

Similar to findings of Andrew Ure regarding English firms 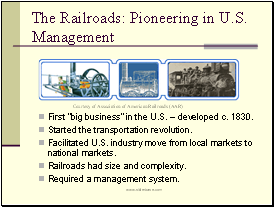 The Railroads: Pioneering in U.S. Management

Railroads had size and complexity. 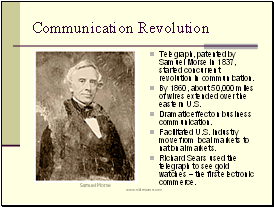 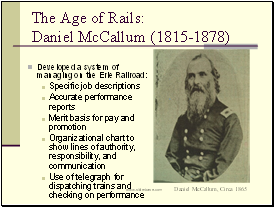 Developed a system of managing on the Erie Railroad:

Merit basis for pay and promotion

Organizational chart to show lines of authority, responsibility, and communication

Use of telegraph for dispatching trains and checking on performance 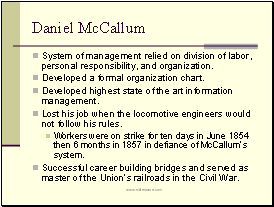 System of management relied on division of labor, personal responsibility, and organization.

Lost his job when the locomotive engineers would not follow his rules.

Workers were on strike for ten days in June 1854 then 6 months in 1857 in defiance of McCallum’s system.

Successful career building bridges and served as master of the Union’s railroads in the Civil War.