Magnitude: Friction is proportional to the normal force

μ is the coefficient of friction

The coefficients of friction are nearly independent of the area of contact (why?) 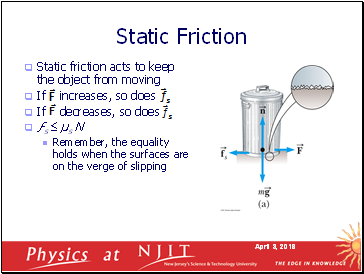 Static friction acts to keep the object from moving

If increases, so does

If decreases, so does

Remember, the equality holds when the surfaces are on the verge of slipping 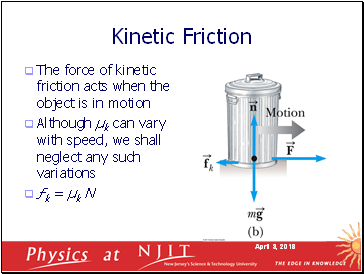 Although µk can vary with speed, we shall neglect any such variations 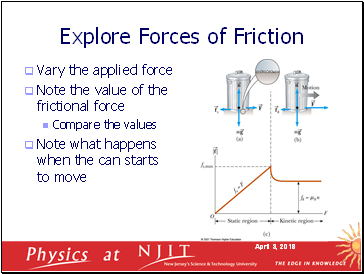 Note the value of the frictional force

Note what happens when the can starts to move 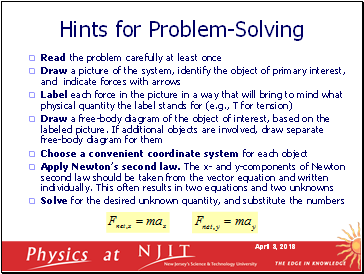 Read the problem carefully at least once

Draw a picture of the system, identify the object of primary interest, and indicate forces with arrows

Label each force in the picture in a way that will bring to mind what physical quantity the label stands for (e.g., T for tension)

Choose a convenient coordinate system for each object

Apply Newton’s second law. The x- and y-components of Newton second law should be taken from the vector equation and written individually. This often results in two equations and two unknowns

Solve for the desired unknown quantity, and substitute the numbers 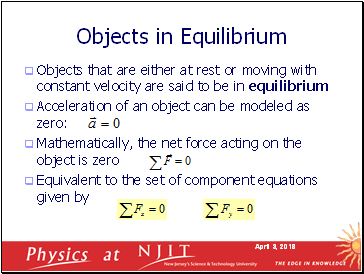 Acceleration of an object can be modeled as zero:

Mathematically, the net force acting on the object is zero

Equivalent to the set of component equations given by 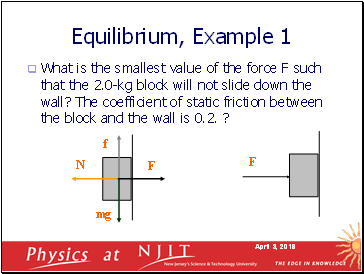 What is the smallest value of the force F such that the 2.0-kg block will not slide down the wall? The coefficient of static friction between the block and the wall is 0.2. ? 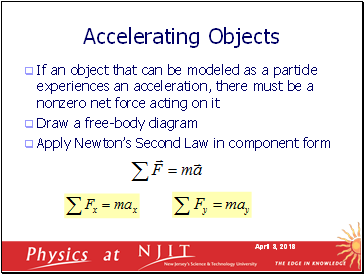