We’ve seen how many frequencies can combine to produce a complicated waveform. If two frequencies that are nearly the same combine, a phenomenon called beats occurs. The resulting waveform increases and decreases in amplitude in a periodic way, i.e., the sound gets louder and softer in a regular pattern. Hear Beats When two waves differ slightly in frequency, they are alternately in phase and out of phase. Suppose the two original waves have frequencies f1 and f2. Then their superposition (below) will have their average frequency and will get louder and softer with a frequency of | f1 - f2 |. 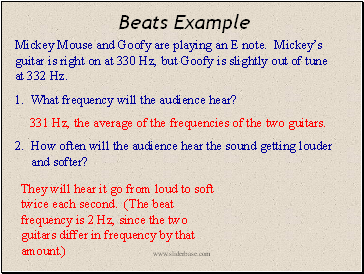 Mickey Mouse and Goofy are playing an E note. Mickey’s guitar is right on at 330 Hz, but Goofy is slightly out of tune at 332 Hz.

1. What frequency will the audience hear?

2. How often will the audience hear the sound getting louder and softer?

331 Hz, the average of the frequencies of the two guitars.

They will hear it go from loud to soft twice each second. (The beat frequency is 2 Hz, since the two guitars differ in frequency by that amount.) 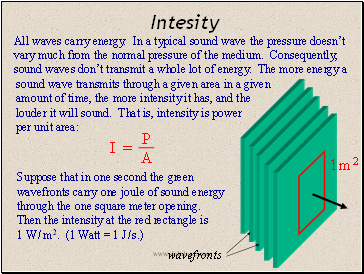 All waves carry energy. In a typical sound wave the pressure doesn’t vary much from the normal pressure of the medium. Consequently, sound waves don’t transmit a whole lot of energy. The more energy a

sound wave transmits through a given area in a given amount of time, the more intensity it has, and the louder it will sound. That is, intensity is power per unit area:

Suppose that in one second the green wavefronts carry one joule of sound energy through the one square meter opening. Then the intensity at the red rectangle is 1 W / m 2. (1 Watt = 1 J / s.) 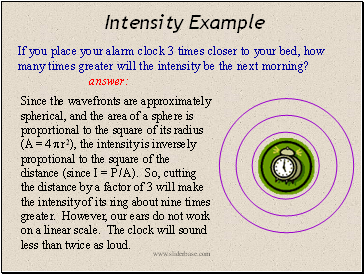 If you place your alarm clock 3 times closer to your bed, how many times greater will the intensity be the next morning? answer: 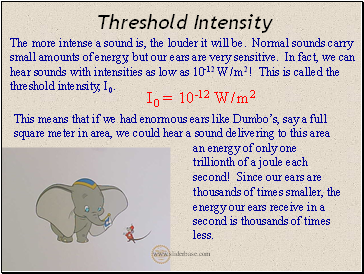 The more intense a sound is, the louder it will be. Normal sounds carry small amounts of energy, but our ears are very sensitive. In fact, we can hear sounds with intensities as low as 10-12 W / m 2 ! This is called the threshold intensity, I 0.

This means that if we had enormous ears like Dumbo’s, say a full square meter in area, we could hear a sound delivering to this area an energy of only one trillionth of a joule each second! Since our ears are