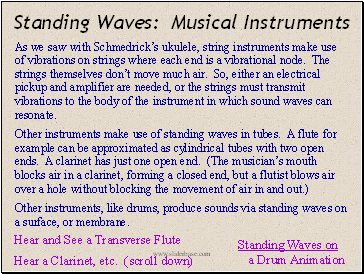 As we saw with Schmedrick’s ukulele, string instruments make use of vibrations on strings where each end is a vibrational node. The strings themselves don’t move much air. So, either an electrical pickup and amplifier are needed, or the strings must transmit vibrations to the body of the instrument in which sound waves can resonate.

Other instruments make use of standing waves in tubes. A flute for example can be approximated as cylindrical tubes with two open ends. A clarinet has just one open end. (The musician’s mouth blocks air in a clarinet, forming a closed end, but a flutist blows air over a hole without blocking the movement of air in and out.)

Other instruments, like drums, produce sounds via standing waves on a surface, or membrane.

Hear and See a Transverse Flute

Hear a Clarinet, etc. (scroll down)

Standing Waves on a Drum Animation 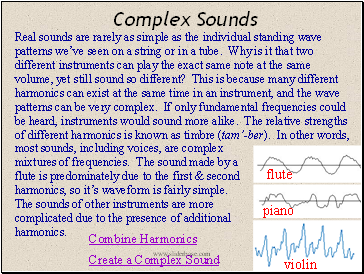 Real sounds are rarely as simple as the individual standing wave patterns we’ve seen on a string or in a tube. Why is it that two different instruments can play the exact same note at the same volume, yet still sound so different? This is because many different harmonics can exist at the same time in an instrument, and the wave patterns can be very complex. If only fundamental frequencies could be heard, instruments would sound more alike. The relative strengths of different harmonics is known as timbre (tam’-ber). In other words, most sounds, including voices, are complex mixtures of frequencies. The sound made by a flute is predominately due to the first & second harmonics, so it’s waveform is fairly simple. The sounds of other instruments are more complicated due to the presence of additional harmonics. 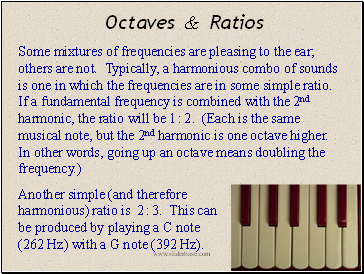 Some mixtures of frequencies are pleasing to the ear; others are not. Typically, a harmonious combo of sounds is one in which the frequencies are in some simple ratio. If a fundamental frequency is combined with the 2nd harmonic, the ratio will be 1 : 2. (Each is the same musical note, but the 2nd harmonic is one octave higher. In other words, going up an octave means doubling the frequency.) 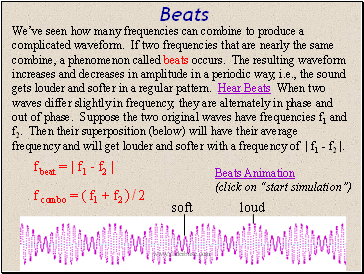