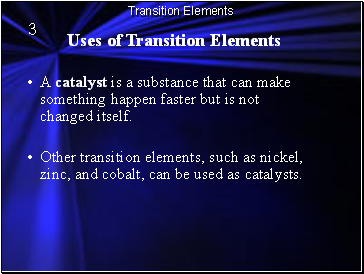 A catalyst is a substance that can make something happen faster but is not changed itself.

Other transition elements, such as nickel, zinc, and cobalt, can be used as catalysts. 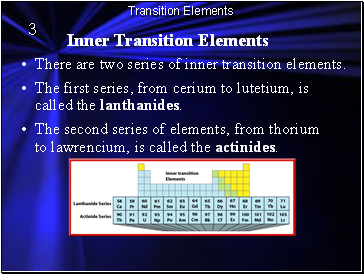 There are two series of inner transition elements.

The first series, from cerium to lutetium, is called the lanthanides.

The second series of elements, from thorium to lawrencium, is called the actinides. 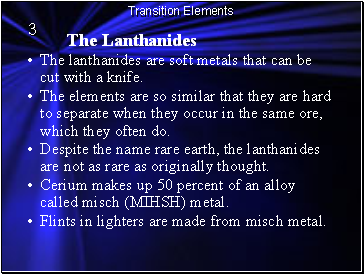 The lanthanides are soft metals that can be cut with a knife.

The elements are so similar that they are hard to separate when they occur in the same ore, which they often do.

Despite the name rare earth, the lanthanides are not as rare as originally thought.

Flints in lighters are made from misch metal. 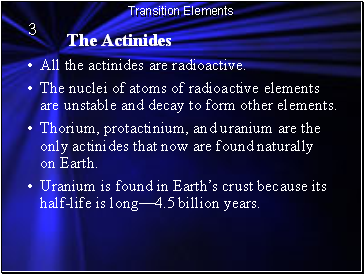 All the actinides are radioactive.

The nuclei of atoms of radioactive elements are unstable and decay to form other elements.

Thorium, protactinium, and uranium are the only actinides that now are found naturally on Earth.

Uranium is found in Earth’s crust because its half-life is long—4.5 billion years. 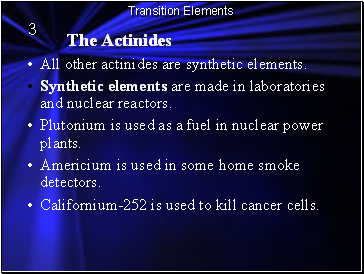 All other actinides are synthetic elements.

Synthetic elements are made in laboratories and nuclear reactors.

Plutonium is used as a fuel in nuclear power plants.

Americium is used in some home smoke detectors. 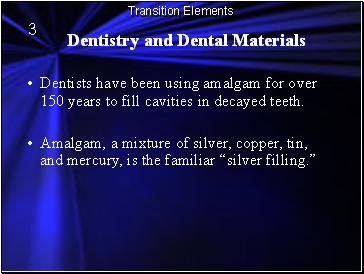 Dentists have been using amalgam for over 150 years to fill cavities in decayed teeth.

Amalgam, a mixture of silver, copper, tin, and mercury, is the familiar “silver filling.” 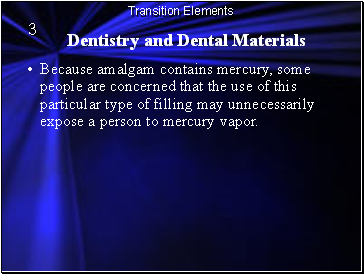 Because amalgam contains mercury, some people are concerned that the use of this particular type of filling may unnecessarily expose a person to mercury vapor. 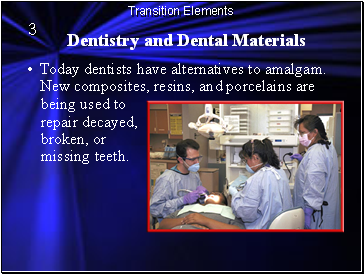