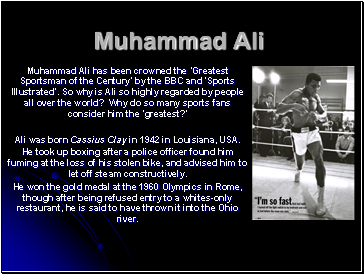 Muhammad Ali has been crowned the ‘Greatest Sportsman of the Century’ by the BBC and ‘Sports Illustrated’. So why is Ali so highly regarded by people all over the world? Why do so many sports fans consider him the ‘greatest?’

Ali was born Cassius Clay in 1942 in Louisiana, USA.

He took up boxing after a police officer found him fuming at the loss of his stolen bike, and advised him to let off steam constructively.

He won the gold medal at the 1960 Olympics in Rome, though after being refused entry to a whites-only restaurant, he is said to have thrown it into the Ohio river. 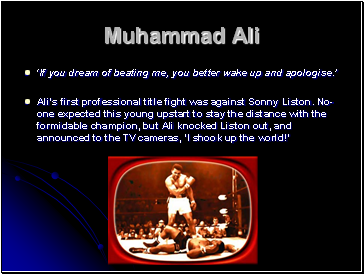 ‘If you dream of beating me, you better wake up and apologise.’

Ali’s first professional title fight was against Sonny Liston. No-one expected this young upstart to stay the distance with the formidable champion, but Ali knocked Liston out, and announced to the TV cameras, ‘I shook up the world!’ 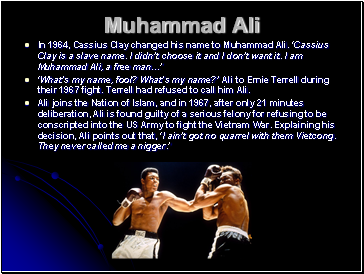 ‘What’s my name, fool? What’s my name?’ Ali to Ernie Terrell during their 1967 fight. Terrell had refused to call him Ali.

Ali joins the Nation of Islam, and in 1967, after only 21 minutes deliberation, Ali is found guilty of a serious felony for refusing to be conscripted into the US Army to fight the Vietnam War. Explaining his decision, Ali points out that, ‘I ain’t got no quarrel with them Vietcong. They never called me a nigger.’ 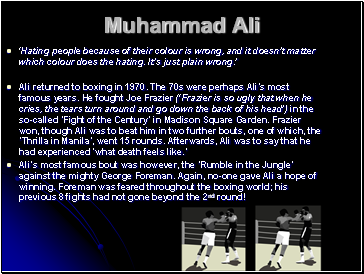 ‘Hating people because of their colour is wrong, and it doesn’t matter which colour does the hating. It’s just plain wrong.’

Ali returned to boxing in 1970. The 70s were perhaps Ali’s most famous years. He fought Joe Frazier (‘Frazier is so ugly that when he cries, the tears turn around and go down the back of his head’) in the so-called ‘Fight of the Century’ in Madison Square Garden. Frazier won, though Ali was to beat him in two further bouts, one of which, the ‘Thrilla in Manila’, went 15 rounds. Afterwards, Ali was to say that he had experienced ‘what death feels like.’

Ali’s most famous bout was however, the ‘Rumble in the Jungle’ against the mighty George Foreman. Again, no-one gave Ali a hope of winning. Foreman was feared throughout the boxing world; his previous 8 fights had not gone beyond the 2nd round! 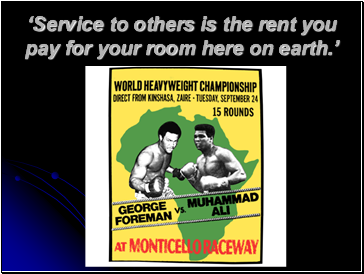 ‘Service to others is the rent you pay for your room here on earth.’