Lord of the Flies
Page
2

Simon is sacrificed because he tries to give an explanation of the true nature of the beast. He tries to destroy the fear in the boys by making them realise that they are responsible for the evils on the island

Piggy is destroyed because he tries to act rationally and to replace the disorder and anarchy (represented by Jack and his tribe ) with order and rule. Piggy’s continual conflicts with Jack symbolises not only the rejection of Piggy personally but also of his ideas. He represents the voice of adult authority, order, reason; everything that Jack and his tribe wish to abolish. It is no surprise that he is associated with the hunting of pigs ”Kill the pig” “Kill Piggy! 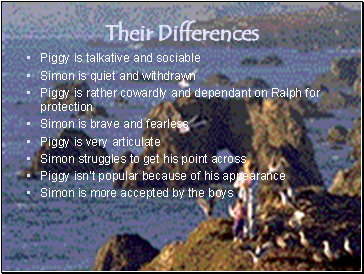 Piggy is talkative and sociable

Simon is quiet and withdrawn

Piggy is rather cowardly and dependant on Ralph for protection

Simon is brave and fearless

Simon struggles to get his point across

Piggy isn’t popular because of his appearance

Simon is more accepted by the boys 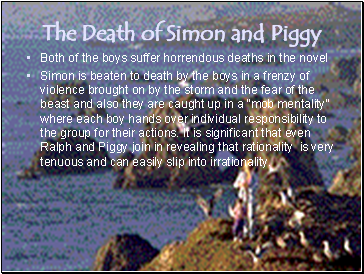 The Death of Simon and Piggy

Both of the boys suffer horrendous deaths in the novel

Simon is beaten to death by the boys in a frenzy of violence brought on by the storm and the fear of the beast and also they are caught up in a “mob mentality” where each boy hands over individual responsibility to the group for their actions. It is significant that even Ralph and Piggy join in revealing that rationality is very tenuous and can easily slip into irrationality. 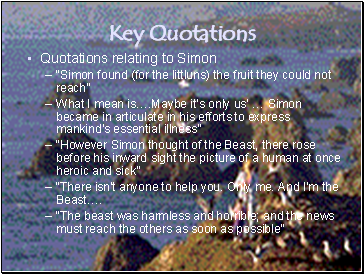 “Simon found (for the littluns) the fruit they could not reach”

What I mean is….Maybe it’s only us’ … Simon became in articulate in his efforts to express mankind's essential illness”

“However Simon thought of the Beast, there rose before his inward sight the picture of a human at once heroic and sick”

“There isn't anyone to help you. Only me. And I’m the Beast….

“The beast was harmless and horrible; and the news must reach the others as soon as possible” 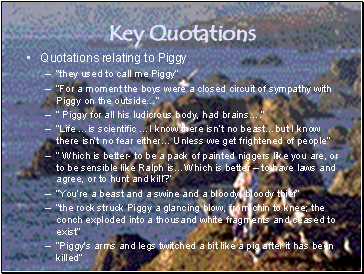 “they used to call me Piggy”

“ Piggy for all his ludicrous body, had brains….”

“ Which is better- to be a pack of painted niggers like you are, or to be sensible like Ralph is…Which is better – to have laws and agree, or to hunt and kill?”

“You’re a beast and a swine and a bloody, bloody thief”