the play’s the thing,/Wherein I’ll catch the conscience of the King” -- Hamlet 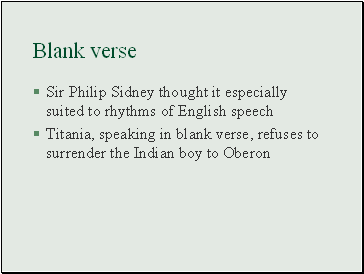 Titania, speaking in blank verse, refuses to surrender the Indian boy to Oberon 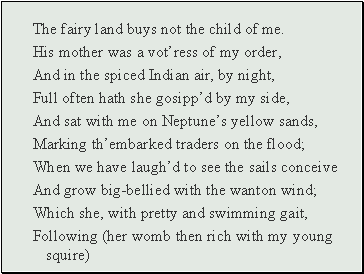 The fairy land buys not the child of me.

His mother was a vot’ress of my order,

And in the spiced Indian air, by night,

Full often hath she gosipp’d by my side,

And sat with me on Neptune’s yellow sands,

Marking th’embarked traders on the flood;

When we have laugh’d to see the sails conceive

And grow big-bellied with the wanton wind;

Which she, with pretty and swimming gait,

Following (her womb then rich with my young squire) 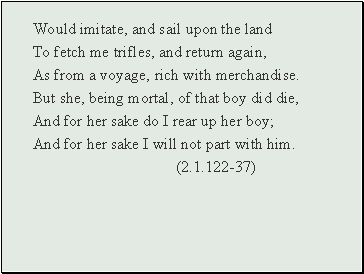 Would imitate, and sail upon the land

To fetch me trifles, and return again,

As from a voyage, rich with merchandise.

But she, being mortal, of that boy did die,

And for her sake do I rear up her boy;

And for her sake I will not part with him. 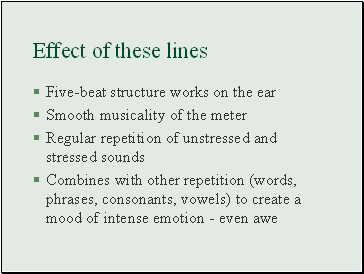 Effect of these lines

Five-beat structure works on the ear

Smooth musicality of the meter

Combines with other repetition (words, phrases, consonants, vowels) to create a mood of intense emotion - even awe 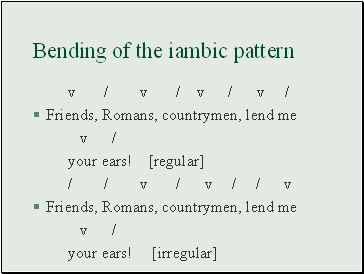 Bending of the iambic pattern 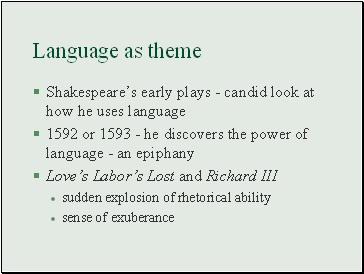 Shakespeare’s early plays - candid look at how he uses language 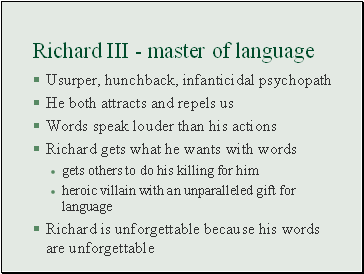 He both attracts and repels us

Words speak louder than his actions

Richard gets what he wants with words

gets others to do his killing for him

heroic villain with an unparalleled gift for language