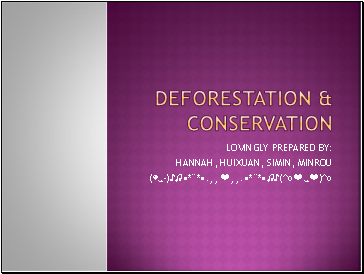 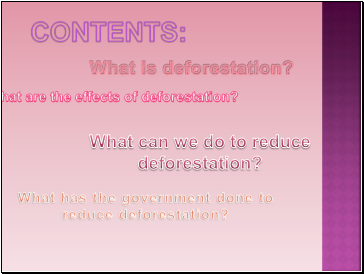 What are the effects of deforestation?

What has the government done to reduce deforestation? 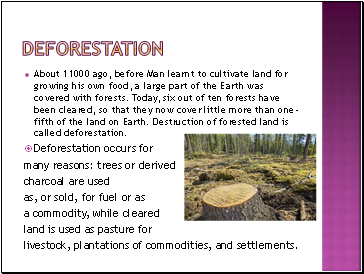 About 11000 ago, before Man learnt to cultivate land for growing his own food, a large part of the Earth was covered with forests. Today, six out of ten forests have been cleared, so that they now cover little more than one-fifth of the land on Earth. Destruction of forested land is called deforestation.

many reasons: trees or derived

as, or sold, for fuel or as

a commodity, while cleared

land is used as pasture for

livestock, plantations of commodities, and settlements. 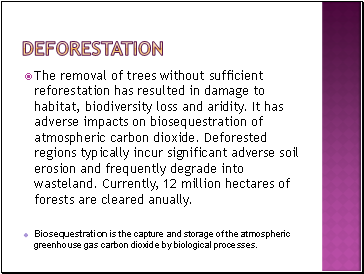 The removal of trees without sufficient reforestation has resulted in damage to habitat, biodiversity loss and aridity. It has adverse impacts on biosequestration of atmospheric carbon dioxide. Deforested regions typically incur significant adverse soil erosion and frequently degrade into wasteland. Currently, 12 million hectares of forests are cleared anually.

Biosequestration is the capture and storage of the atmospheric greenhouse gas carbon dioxide by biological processes. 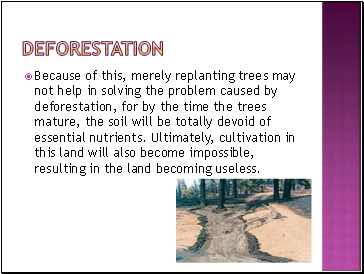 Because of this, merely replanting trees may not help in solving the problem caused by deforestation, for by the time the trees mature, the soil will be totally devoid of essential nutrients. Ultimately, cultivation in this land will also become impossible, resulting in the land becoming useless. 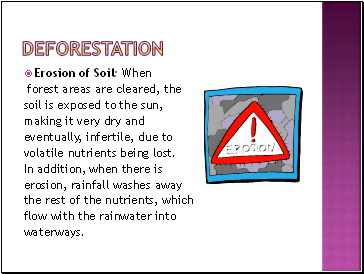 Erosion of Soil: When

forest areas are cleared, the

soil is exposed to the sun,

making it very dry and

eventually, infertile, due to

In addition, when there is

the rest of the nutrients, which

flow with the rainwater into 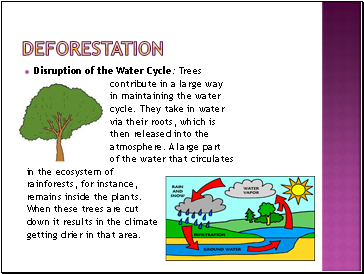 Disruption of the Water Cycle: Trees

contribute in a large way

in maintaining the water

cycle. They take in water

via their roots, which is

then released into the

of the water that circulates