in the ecosystem of

remains inside the plants.

When these trees are cut

down it results in the climate

getting drier in that area. 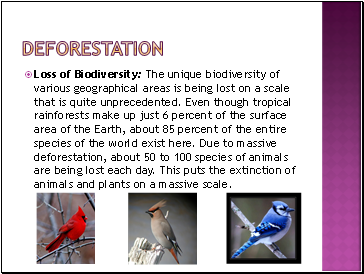 Loss of Biodiversity: The unique biodiversity of various geographical areas is being lost on a scale that is quite unprecedented. Even though tropical rainforests make up just 6 percent of the surface area of the Earth, about 85 percent of the entire species of the world exist here. Due to massive deforestation, about 50 to 100 species of animals are being lost each day. This puts the extinction of animals and plants on a massive scale. 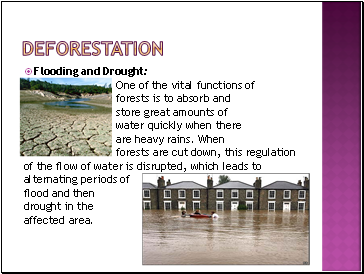 One of the vital functions of

forests is to absorb and

water quickly when there

are heavy rains. When

forests are cut down, this regulation

of the flow of water is disrupted, which leads to 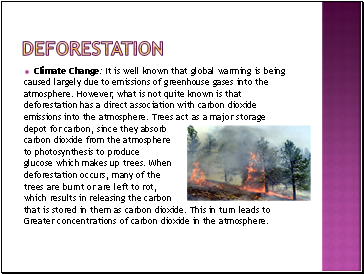 Climate Change: It is well known that global warming is being

caused largely due to emissions of greenhouse gases into the

atmosphere. However, what is not quite known is that

deforestation has a direct association with carbon dioxide

emissions into the atmosphere. Trees act as a major storage

depot for carbon, since they absorb

carbon dioxide from the atmosphere

to photosynthesis to produce

glucose which makes up trees. When

deforestation occurs, many of the

trees are burnt or are left to rot,

which results in releasing the carbon

that is stored in them as carbon dioxide. This in turn leads to

Greater concentrations of carbon dioxide in the atmosphere. 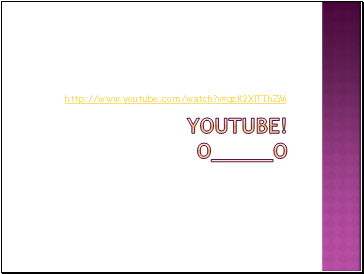 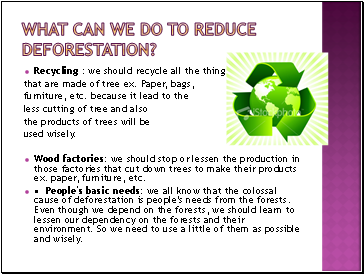 Recycling : we should recycle all the thing

that are made of tree ex. Paper, bags,

furniture, etc. because it lead to the

less cutting of tree and also

the products of trees will be

Wood factories: we should stop or lessen the production in those factories that cut down trees to make their products ex. paper, furniture, etc.

• People's basic needs: we all know that the colossal cause of deforestation is people's needs from the forests. Even though we depend on the forests, we should learn to lessen our dependency on the forests and their environment. So we need to use a little of them as possible and wisely.