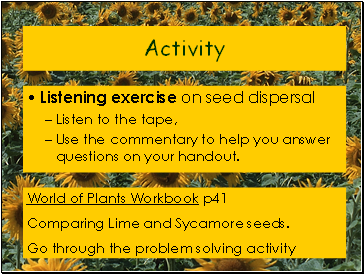 Listen to the tape,

Use the commentary to help you answer questions on your handout.

Go through the problem solving activity 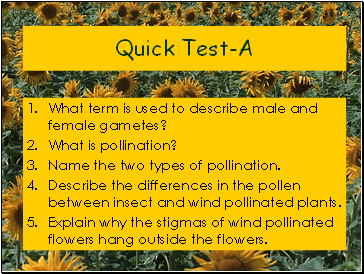 What term is used to describe male and female gametes?

Name the two types of pollination.

Describe the differences in the pollen between insect and wind pollinated plants.

Explain why the stigmas of wind pollinated flowers hang outside the flowers. 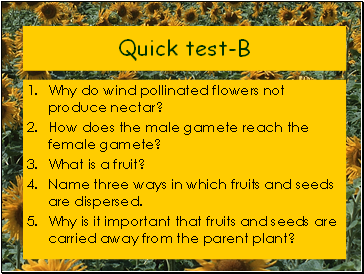 Why do wind pollinated flowers not produce nectar?

How does the male gamete reach the female gamete?

What is a fruit?

Name three ways in which fruits and seeds are dispersed.

Why is it important that fruits and seeds are carried away from the parent plant? 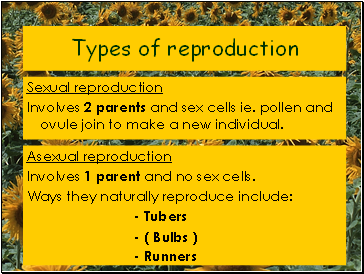 Involves 1 parent and no sex cells.

Ways they naturally reproduce include: 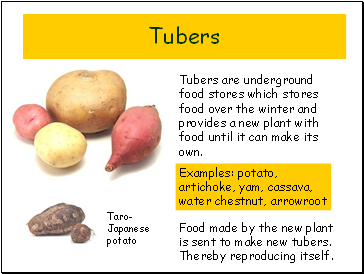 Tubers are underground food stores which stores food over the winter and provides a new plant with food until it can make its own.

Food made by the new plant is sent to make new tubers. Thereby reproducing itself. 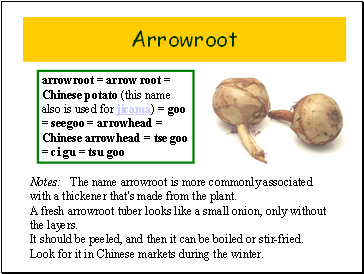 Notes: The name arrowroot is more commonly associated with a thickener that's made from the plant.

A fresh arrowroot tuber looks like a small onion, only without the layers.

It should be peeled, and then it can be boiled or stir-fried.

Look for it in Chinese markets during the winter. 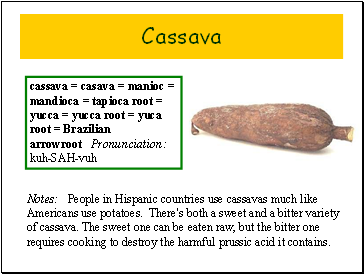 Notes: People in Hispanic countries use cassavas much like Americans use potatoes. There's both a sweet and a bitter variety of cassava. The sweet one can be eaten raw, but the bitter one requires cooking to destroy the harmful prussic acid it contains.