Hipparchus invented the table of chords, a list of the ratio of the size of the chord of a circle to its radius associated with the angle from the centre of the circle that spans the chord.

The equivalent of the sine function in trigonometry. 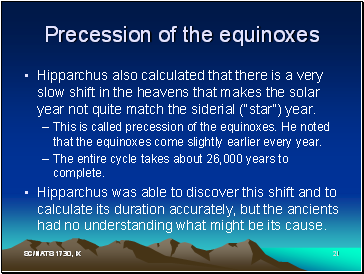 Precession of the equinoxes

Hipparchus also calculated that there is a very slow shift in the heavens that makes the solar year not quite match the siderial (“star”) year.

The entire cycle takes about 26,000 years to complete.

Hipparchus was able to discover this shift and to calculate its duration accurately, but the ancients had no understanding what might be its cause. 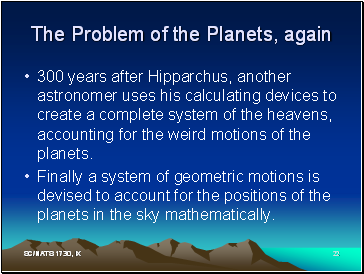 The Problem of the Planets, again

300 years after Hipparchus, another astronomer uses his calculating devices to create a complete system of the heavens, accounting for the weird motions of the planets.

Finally a system of geometric motions is devised to account for the positions of the planets in the sky mathematically. 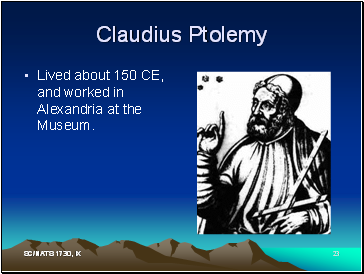 Lived about 150 CE, and worked in Alexandria at the Museum. 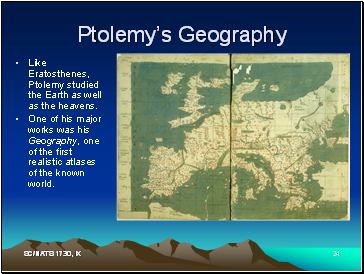 Like Eratosthenes, Ptolemy studied the Earth as well as the heavens.

One of his major works was his Geography, one of the first realistic atlases of the known world. 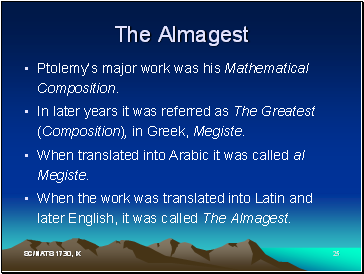 In later years it was referred as The Greatest (Composition), in Greek, Megiste.

When translated into Arabic it was called al Megiste.

When the work was translated into Latin and later English, it was called The Almagest. 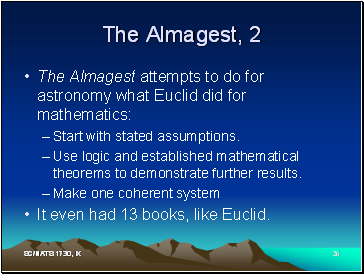 The Almagest attempts to do for astronomy what Euclid did for mathematics:

Use logic and established mathematical theorems to demonstrate further results. 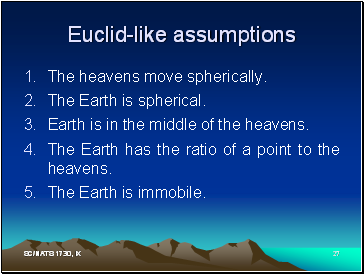 The Earth is spherical.

Earth is in the middle of the heavens.

The Earth has the ratio of a point to the heavens.

The Earth is immobile. 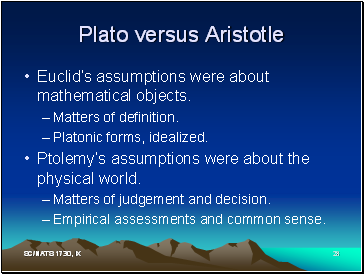