The main problem with Eudoxus’ and Aristotle’s models was that they did not track that observed motions of the planets very well.

Ptolemy’s was much better at putting the planet in the place where it is actually seen. 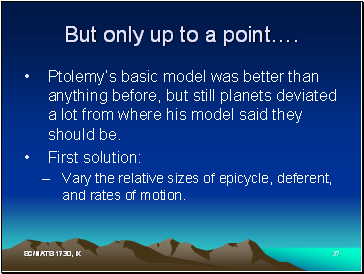 But only up to a point….

Ptolemy’s basic model was better than anything before, but still planets deviated a lot from where his model said they should be.

Vary the relative sizes of epicycle, deferent, and rates of motion. 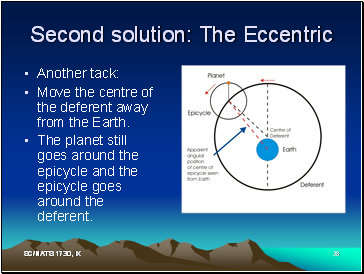 Move the centre of the deferent away from the Earth. 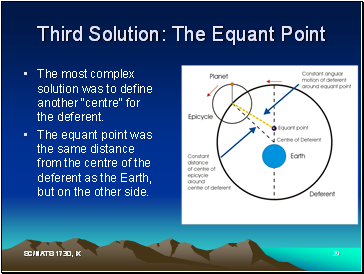 The most complex solution was to define another “centre” for the deferent.

The equant point was the same distance from the centre of the deferent as the Earth, but on the other side. 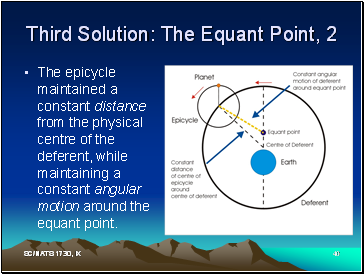 The epicycle maintained a constant distance from the physical centre of the deferent, while maintaining a constant angular motion around the equant point. 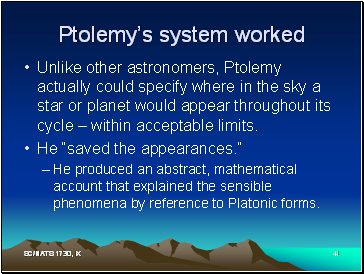 Unlike other astronomers, Ptolemy actually could specify where in the sky a star or planet would appear throughout its cycle – within acceptable limits.

He “saved the appearances.”

He produced an abstract, mathematical account that explained the sensible phenomena by reference to Platonic forms. 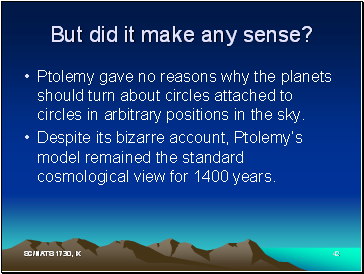 But did it make any sense?

Ptolemy gave no reasons why the planets should turn about circles attached to circles in arbitrary positions in the sky.

Despite its bizarre account, Ptolemy’s model remained the standard cosmological view for 1400 years.