Still, a large majority of the American public continued to oppose any direct military intervention into the conflict well into 1941. 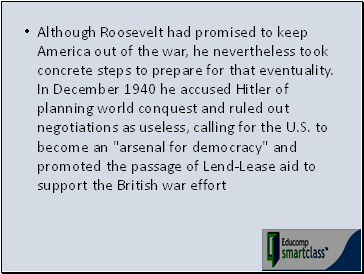 Although Roosevelt had promised to keep America out of the war, he nevertheless took concrete steps to prepare for that eventuality. In December 1940 he accused Hitler of planning world conquest and ruled out negotiations as useless, calling for the U.S. to become an "arsenal for democracy" and promoted the passage of Lend-Lease aid to support the British war effort 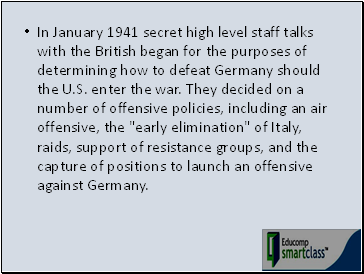 In January 1941 secret high level staff talks with the British began for the purposes of determining how to defeat Germany should the U.S. enter the war. They decided on a number of offensive policies, including an air offensive, the "early elimination" of Italy, raids, support of resistance groups, and the capture of positions to launch an offensive against Germany. 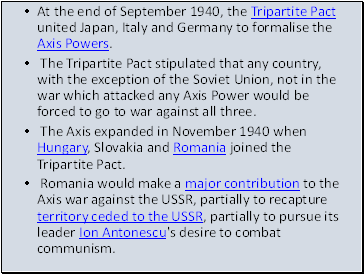 At the end of September 1940, the Tripartite Pact united Japan, Italy and Germany to formalise the Axis Powers.

The Tripartite Pact stipulated that any country, with the exception of the Soviet Union, not in the war which attacked any Axis Power would be forced to go to war against all three.

The Axis expanded in November 1940 when Hungary, Slovakia and Romania joined the Tripartite Pact. 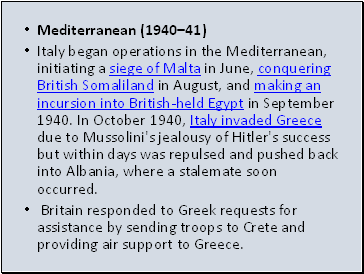 Italy began operations in the Mediterranean, initiating a siege of Malta in June, conquering British Somaliland in August, and making an incursion into British-held Egypt in September 1940. In October 1940, Italy invaded Greece due to Mussolini's jealousy of Hitler's success but within days was repulsed and pushed back into Albania, where a stalemate soon occurred.

Britain responded to Greek requests for assistance by sending troops to Crete and providing air support to Greece. 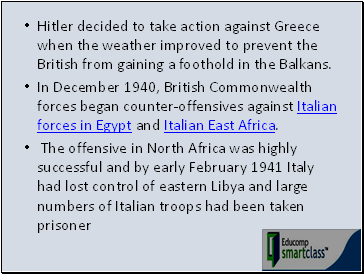 Hitler decided to take action against Greece when the weather improved to prevent the British from gaining a foothold in the Balkans.